VALORANT came out to the public spotlight in June of 2020, featuring 3 unique maps for Agents to battle it out on. Since then, we’ve seen the release of 5 additional maps, and many, many changes on them. In this article, we hope to take a look at the current VALORANT map pool, and its state in the competitive circuit.

We shall take a look at how each map has been played in 3 major VALORANT esport regions: Europe, North America, and Asia-Pacific. We shall look into the history of the map and its defining characteristics and features. We hope to look at their play-rates, plus their prospects in terms of Attack/Defense. As well as looking at must picks and the most popular comps on each map.

We considered a grand total of 3278 games for our study, over the span of a month. The stats were all recorded on March 16.

As the stats were taken right after the Controller update of March, 2022, we are yet to see some of the implications of the update. We haven’t had enough games on the new patch to establish some of the patterns in the data. Agent compositions are at risk of change, with more games being played on the new patch and with players figuring out how to approach the maps with the updated controllers.

*All stats are taken from www.rib.gg and used with permission.

Each of the following maps provides something completely unique to the VALORANT map pool and only furthers the possibilities players can undertake with in the permutations of the game.

Lets say, on Fracture we have possibly the most unorthodox map layout in tactical FPS history. And yet it plays out most interestingly, whilst also providing a unique way to play the game and a new perspective, on VALORANT in general.

On that note, take a look at Breeze. Prior to Breeze’s addition in the map pool, Viper wasn’t used as prominently as she is today. The unique layout of the bombsites, forced players into the Viper pick, along with extremely strong buffs, and since that moment on players have learnt that Viper is a great pick to use in other maps aswell. 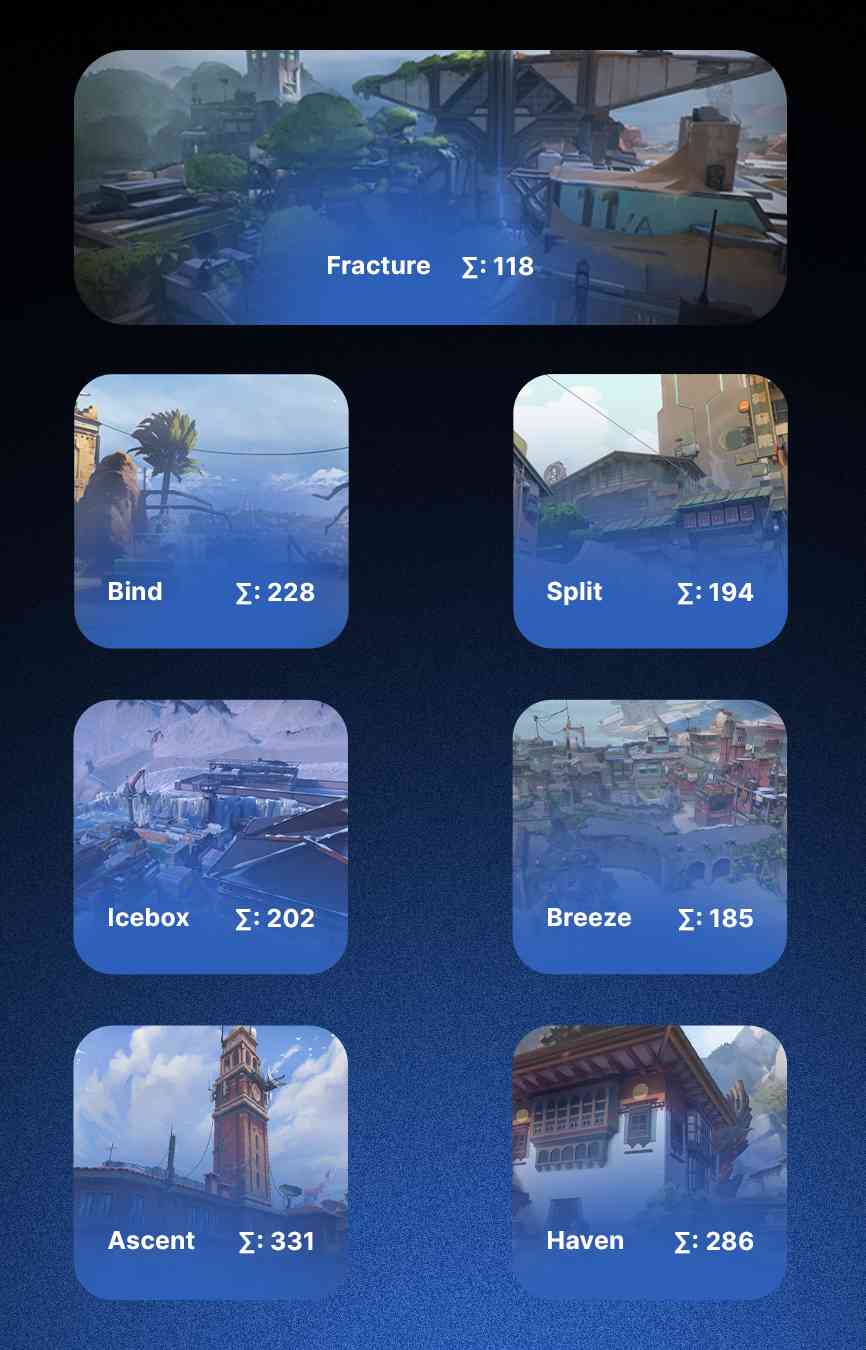 VALORANT maps so far, have been more than just maps. They’re not just differently coloured boxes scattered in different settings where two set of teams shoot each other, they’ve inherently much grander in the setting. They’re king makers, game changers and one of the most unique things about VALORANT yet.

Ascent is a three-laned map known to heavily resemble a classic “counter-strike” map. Ascent has toggle-able door switches which can open and close doors on both A and B sites. It features a prominent middle lane, leading into both sites via Mid-Market and A-short.

The most popular composition on Ascent is: 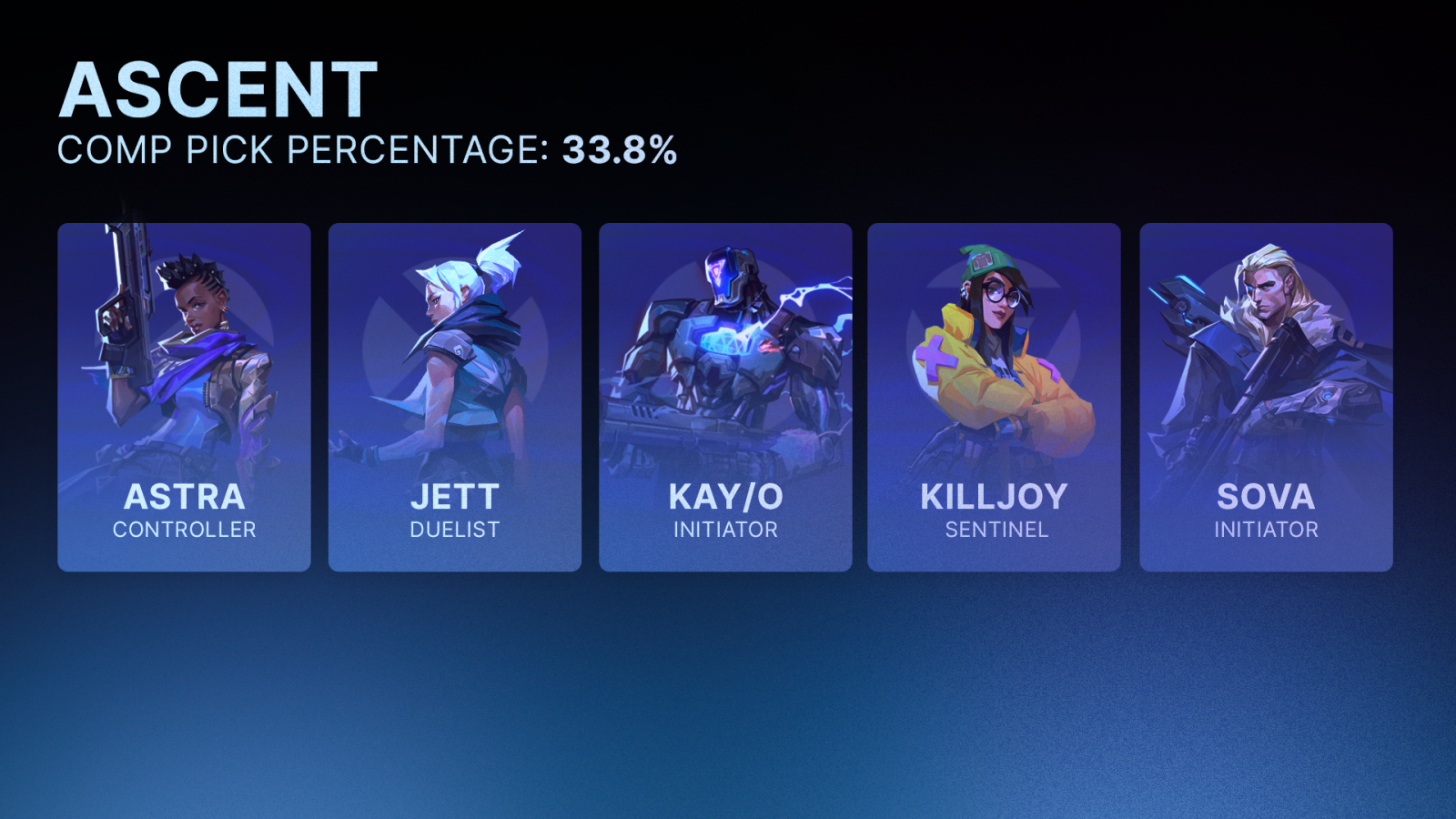 This composition has been played in 33.8% of all Ascent games in the last month. With a double initiator combo, this composition allows the most flexibility and adaptability of most compositions. It gives the attackers plenty of information and initiating ability, and also provides avenues of defense by utilising the aggression that the initiators comboed with the Jett can help facilitate.

Bind is a two-bombsite map, known to not feature a prominent middle lane in the map. It has two teleporters that allow for very fast rotations, and mind games to be played. It has two bombsites, and both bomb sites have two avenues of approach to them.

The most popular composition on Bind is: 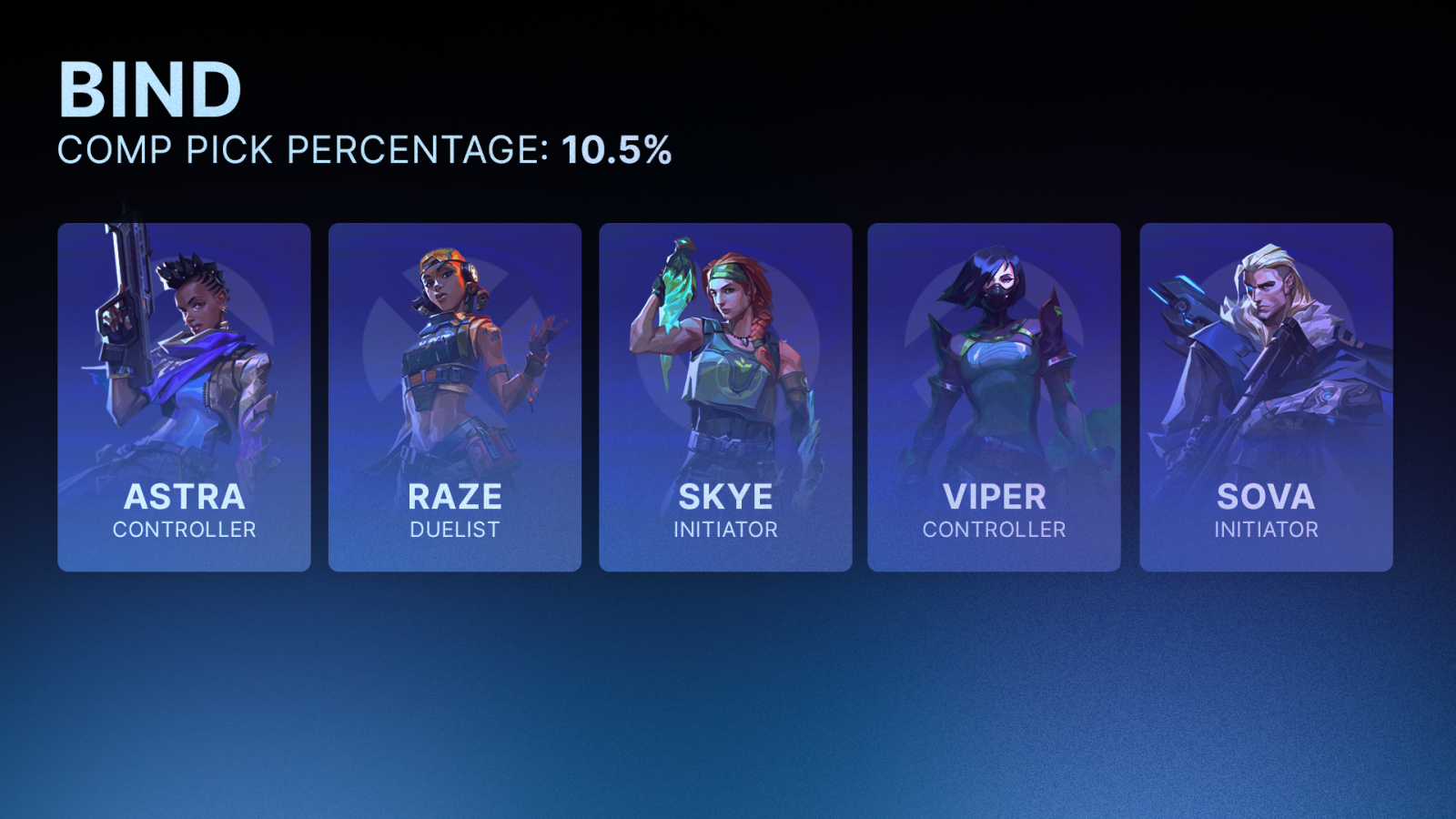 Bind, like Ascent currently favours double initiator comps, with usually an addition of a Viper in place of a traditional sentinel. This comp has been seen to be played 10.5% of all times Bind has been played. This comp does not feature Jett, with Raze replacing it as the superior duelist on Bind. However, many compositions have been seen to be viable on Bind.

Breeze is a two bomb-site wide open map set for long range gun fights. Breeze has been an interesting map addition to the map pool, causing teams to experiment with many relatively newer things on the map. It features a one way drop, and a switch that can close or open a door similar to the one in Ascent.

The most popular composition on Breeze is: 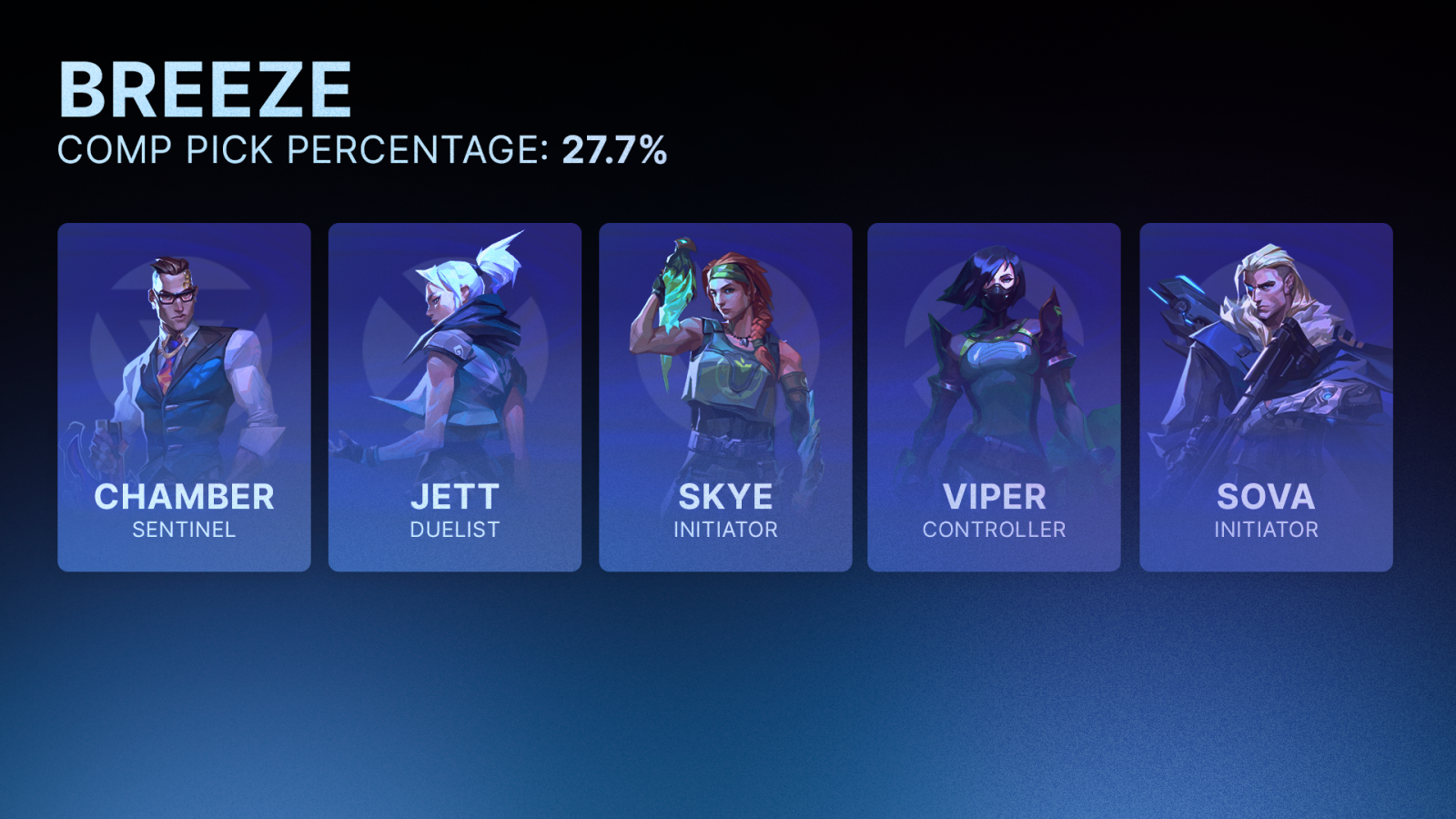 This composition has been played 27.7% of all times Breeze has been played. It provides significant playmaking initiation in the Skye flashes, and information with both the Sova and Skye. Chamber can either solo lock-down B site, or make it significantly easier to Hold A without being sandwiched. Viper serves as the controller and pseudo sentinel on the defending site.

Most compositions on Breeze follow the same pattern of Viper as the solo-controller, with two initiators, usually a Sova supplemented by either a Kayo or a Skye. The one duelist at the moment is Jett, but as teams learn to play Neon we could see change. The sentinel here is Chamber, but a significant number of teams do pick Cypher over him.

Haven is a three bomb-site map with a diverse set of bomb sites. The attackers have 4 contact spots with the defenders; in Garage, Middle, A-Lobby, and C-long.

The most popular composition on Haven is: 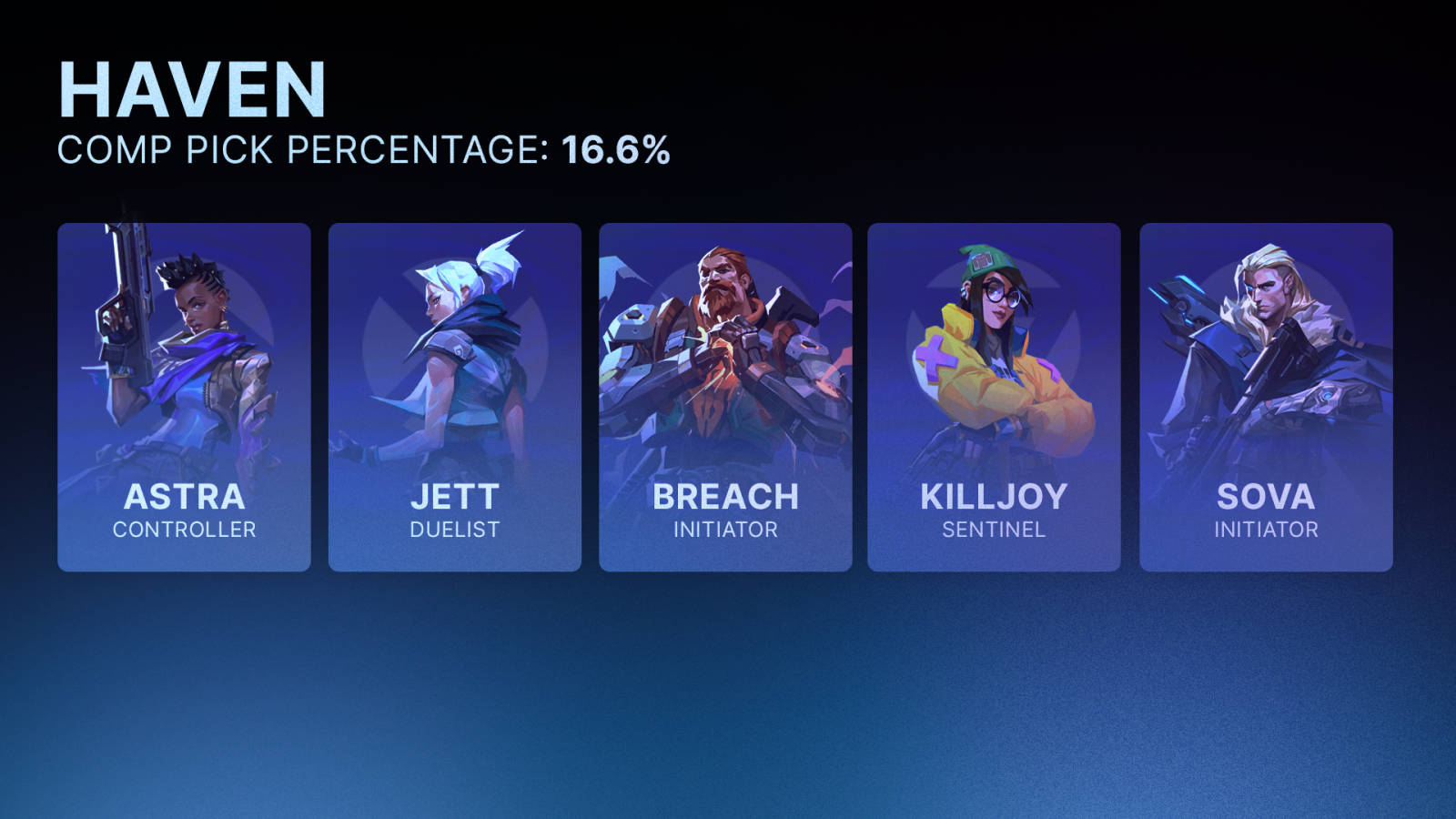 This is by far the most picked composition on Haven at 16.6%. Most comps on Haven feature a similar core of Astra, Killjoy, Jett with the last two being filled out with two initiators. Most teams do feature Breach, Sova and Killjoy but some teams have started picking up Kayo as well.

Breach is extremely strong on Haven with his flashes and stuns providing great value on the long lanes and close corners of Haven. Killjoy is staple on Haven with her ability to lockdown either A solo, lockdown both Garage-Mid or Garage and C. Astra also provides a ton of value with her utility across this large map, allowing for lots of set plays, and fast executions on the Attacking side.

Icebox was the 5th official map added into the map pool, with it peculiarly featuring quite a bit of verticality.

The most popular composition on Icebox is the following: 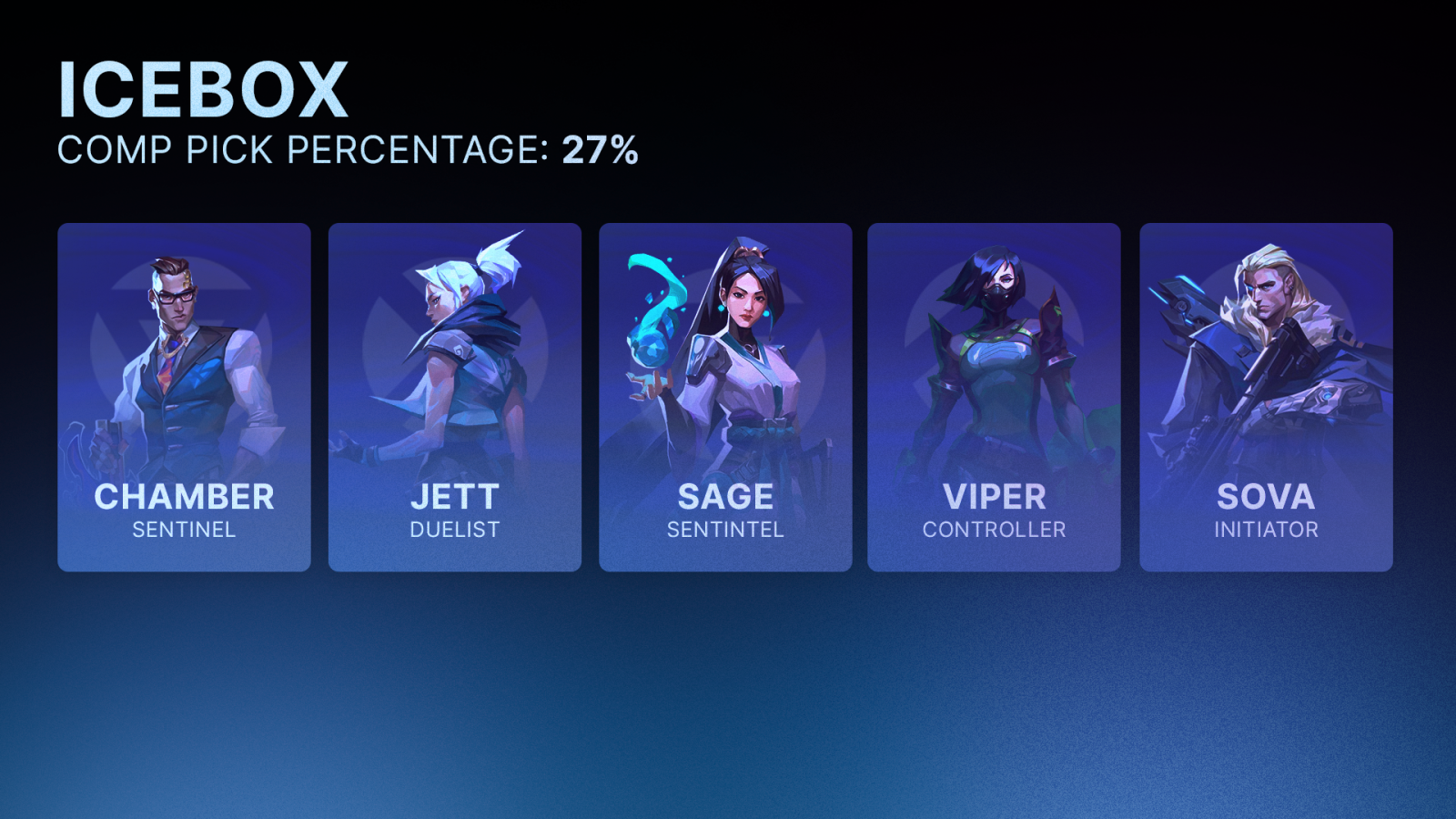 The following composition provides quite al ot of defensive prowess, and stall ability to a heavily Attacking-sided map. Chamber is necessary to lockdown either the B site or parts of Mid, allowing the Defence to rotate more freely and defend points of contact. Sage is extremely strong for her ability to wall plant, and also get lots of cheeky off-angles and not to mention her Resurrection. Viper is the staple controller on this map, providing great walls to block both A and B and very strong post plant capability.

Fracture is the latest addition to the VALORANT map pool. It is an extremely unique take on the usual tactical FPS defuse map, with the Attackers starting out at two different spawn points and converging into the two bomb-sites which are relatively central in the map. It features a map wide zipline and 4 ultimate orbs that can be picked up.

The most popular composition on Fracture is: 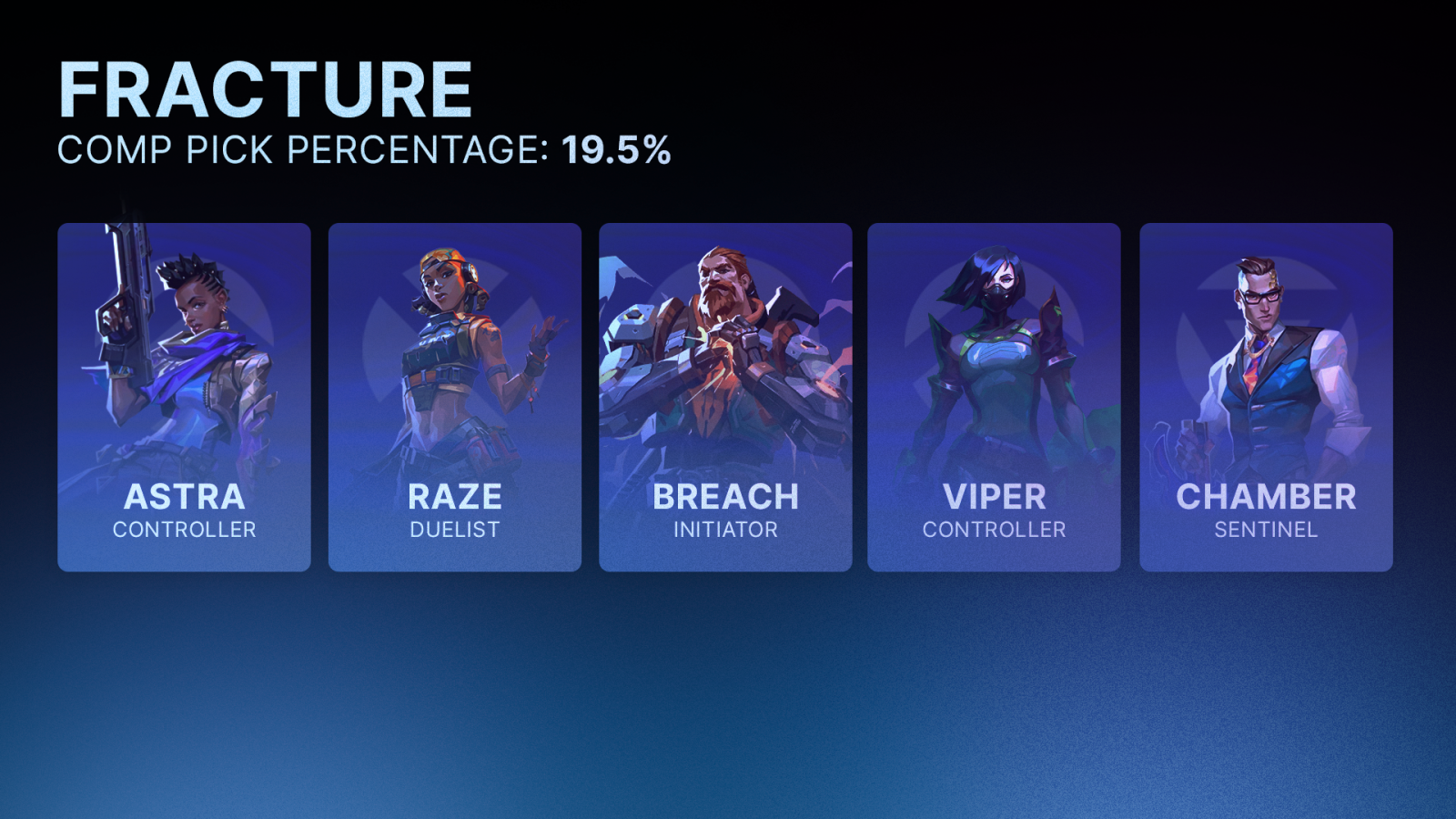 Chamber’s ultimate also has a ton of value, and his ability to make aggressive plays can never be underestimated in general. Raze is generally preferred as the solo duelist due to her kit and exceptional ability in closed corners. Two controllers are picked in Viper and Astra due to their pseudo-sentinel ability whilst also allowing their team to properly control the map.

Split is one of the first maps that VALORANT was released with. It is a close-corner heavy map with two bomb-sites.

Split is the map in which we’ve seen the most variety of compositions. The most popular composition is: 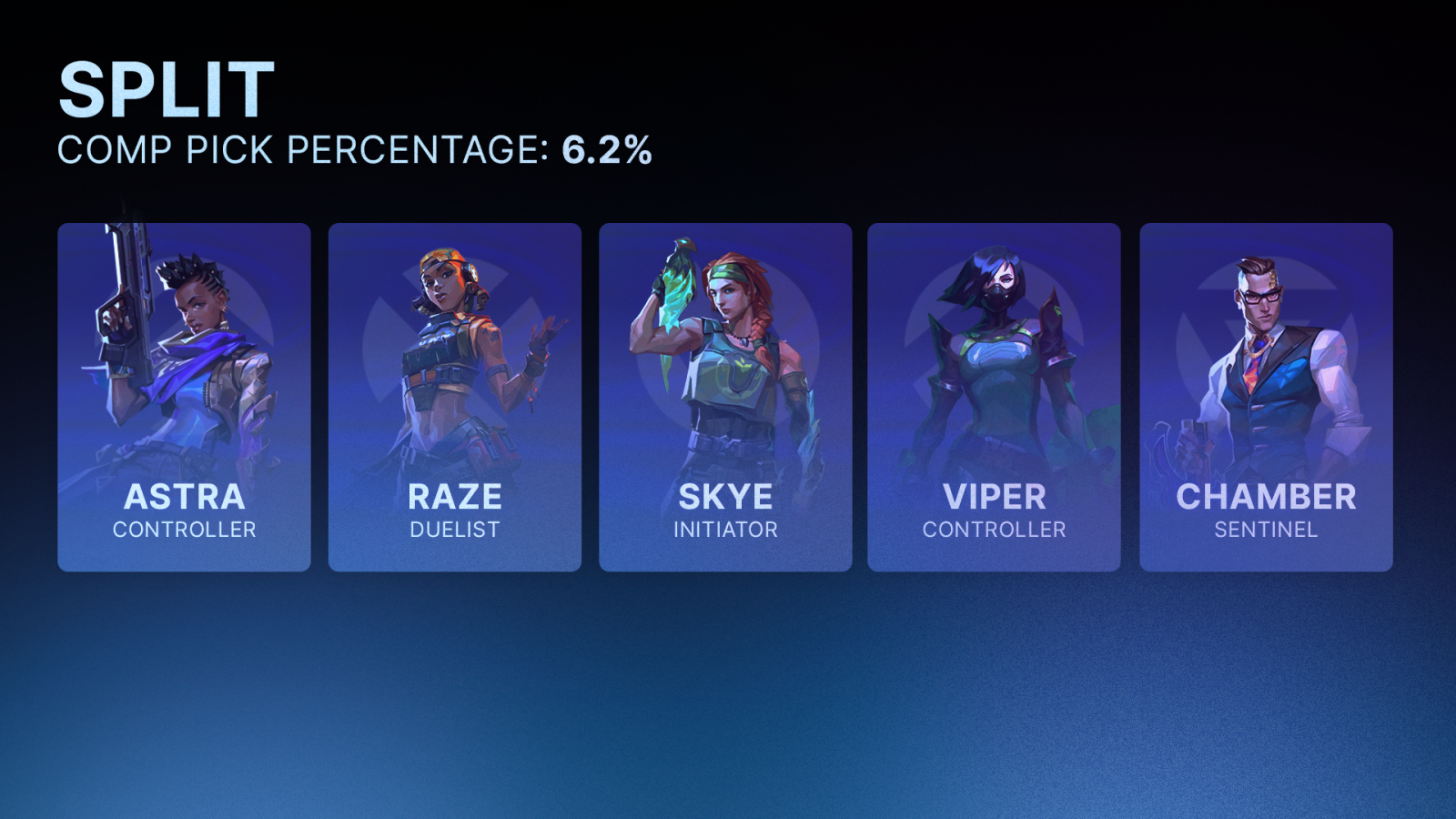 This composition is the most popular at a whopping 6.2%! That's far from the numbers we’ve seen on other maps. Teams have been running a double controller, solo duelist, initiator and sentinel composition on Split. Viper as always provides a lot of value taking control of spaces on the Default on the Attack side, whilst also providing so much stalling power and control on defense. Astra was a must pick, and Chamber as usual is the go-to sentinel.

Raze shows off her potential in a map with such close corners and close ranged fights. Breach has the same perks on such a map, giving off so many places where he can use his blinds and stuns.