Valorant: Yoru Finally Gets The Rework He Deserves

Riot recently announced the long-awaited 'Yoru rework', An update that should make the Japanese agent better and playable.

The update was necessary if Riot wanted to keep him alive since the agent failed to reach players' expectations; Both on high and low levels.

You might be thinking, Why was Yoru considered weak? How did it all start?

Since we got the first glance of what seemed like a reliable new duelist in the trailer, We couldn't wait to play it and try it out, expecting big things and high level plays with his unique abilities.

Time has passed, players tested the agent and then the complaints started. Not a single day passes without someone posting on Reddit complaining of how this agent isn't functioning as it's supposed to.

The average player and professionals such as 100 Thieves player 'Hiko' had similar thoughts and wasn't feeling like the agent would be a fan favorite when he said: 'Yoru is a liability, he's not going to be used much'.

When Yoru was initially released, his abilities were:

On paper, it seemed like the agent was destined to make some great plays and outsmart opponents. However, What the devs had in mind didn't entirely transition into the gameplay and had multiple issues such as:

Yoru is too loud:

This is a big problem that the agent has. His GATECRASH & Ultimate (Dimensional Draft) were very audible, and the enemy could easily hear it and expect different plays.

The fact that Yoru is designed as a lurker agent ultimately makes that role useless except in some scenarios.

While the FAKEOUT ability was made to send a fake echo that mimics the sound of steps to deceive the opponents, it wasn't fooling anyone and certainly didn't sound like actual footsteps unless the player is new and yet to get used to the game's sound cues.

It's also reasonable to mention that the FAKEOUT is visible, making the whole point of the ability pointless.

Most duelists in Valorant are self-sustaining and can make valuable plays with their abilities. However, With Yoru, it's a bit more complicated as it requires more team play and coordination to get the most out of the agent.

While Yoru's Ultimate can be a game-changer at times, sometimes it's useless. Suppose a player uses Dimensional Draft to enter and clear a site for his team. In that case, there must be good communication and coordination with teammates to follow along while providing information and quickly getting picks on the enemy team and taking the site quickly.

That all falls apart if your teammates don't follow along and there's a lack of coordination, which happens too often on low elo levels.

So instead of clearing the site and providing information, you're more luckily to be followed by the enemy till the ultimate is over and force you to teleport, getting absolutely no value off of it.

Somebody must do something!

Riot found themselves in an awkward situation, and they needed to act up and do something about this agent.

Yoru is considered one of the weakest duelists in Valorant, which led to the drop of its pick rate sitting at the bottom. Considering the game's meta changes and even the recent duelist addition 'Neon', it makes sense for the agent to end up like this.

Luckily, Riot tends to care about its game and the audience and announced that a rework is in the process to repair the agent and fix all the issues related to it.

In a blog article on Valorant's official website, They announced the official Yoru rework with all the changes to his abilities, and it was something to be excited about.

The new Yoru will launch during Episode 2 of the current act 2, and here are the changes coming to the blue-haired Japanese duelist.

The changes will make the agent so much better, With the first change coming to this Fakeout.

Instead of the footsteps, A carbon copy of Yoru will appear and run forward. Once shot, It will turn in the direction of the player who hit it to explode, debuff and flashes the enemy.

The devs pointed out that the copy will not confuse teammates, and it would be easy to tell that it's fake. 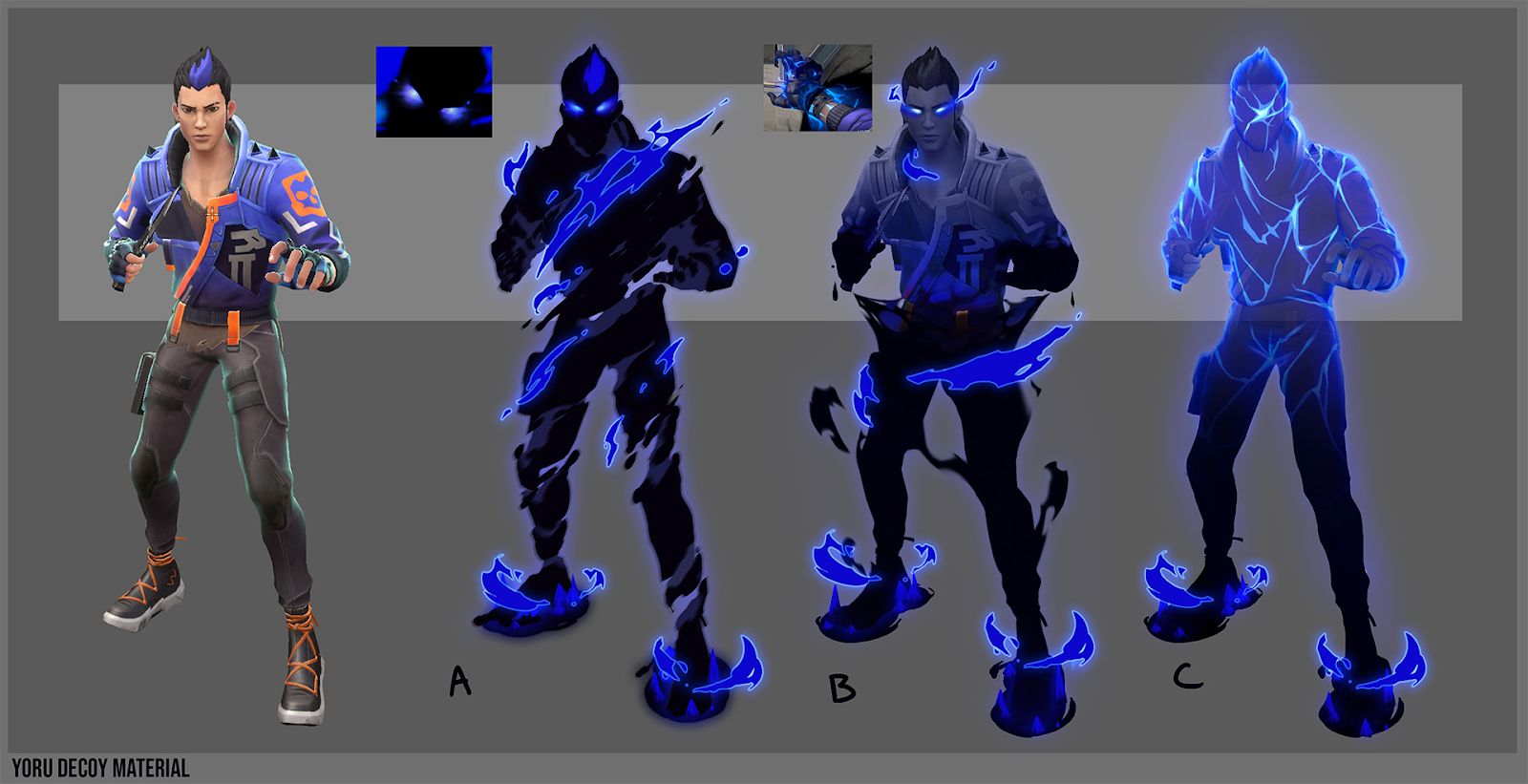 Next up comes the GATECRASH ability, Increasing travel speed by 20% and lowering the range at which enemies can see and hear the tether on the map while it travels.

In addition, Yoru can now activate the tether from a distance to trigger a fake teleport, playing the same audio and visuals as if he were teleporting.

The devs added that while the goal of the fake teleport is to create confusion about Yoru's location, you should be able to go to where the fake teleport occurred and then understand whether the real Yoru is around; or was a fake?

The last change will be affecting his Ultimate (Dimensional Draft); this change is good enough to make players pick Yoru rather than other duelists.

For instance, Yoru will no longer be visible to the enemy team.

That might seem a bit overpowered and invincible, But Riot kept it in mind and made it more balanced simply by reducing the amount of time he can stay invisible.

[The new unequip time is meant to hinder the combo of blasting Shorty right after switching to visible.] An added delay to his invulnerability stops Yoru relying on running around with his mask in hand and jamming it on at first sight of danger. Instead, Yoru can now see the battlefield unhindered, allowing him to enter enemy zones, take in the state of the map and mastermind a play— based around Yoru's change that will enable abilities during his ult.] - Official Valorant blog.

They are also allowing him to use his other abilities while ulting.

The Dimensional Draft changes can be summed up to:

Yoru’s potential with the new changes:

After understanding the changes, It's easy to tell that the new version is much better and improved.

The rework touched essential aspects of the agents and the way it was meant to be played since the devs are heading in the direction they pictured Yoru when it was made.

These changes will make many players switch back to picking Yoru and even hope to see him at a high level of play in professional games.

A stealthy, sneaky agent with powerful abilities to push behind enemy lines and take ground seems like a promising agent to look out for.

You can stay up to date with all the latest Valorant news here on blix.gg.