The time has come for EMEA to find its representatives for the VCT Stage 1 Masters 2022. Only eight teams remain after five weeks of grueling matches between the 12 best that the region has to offer. Who will make it out? Only three names will earn their spot at the first International VALORANT event of the year. Who do you see making it? This preview will help you understand the current landscape of the VCT in EMEA and the stakes for each team. 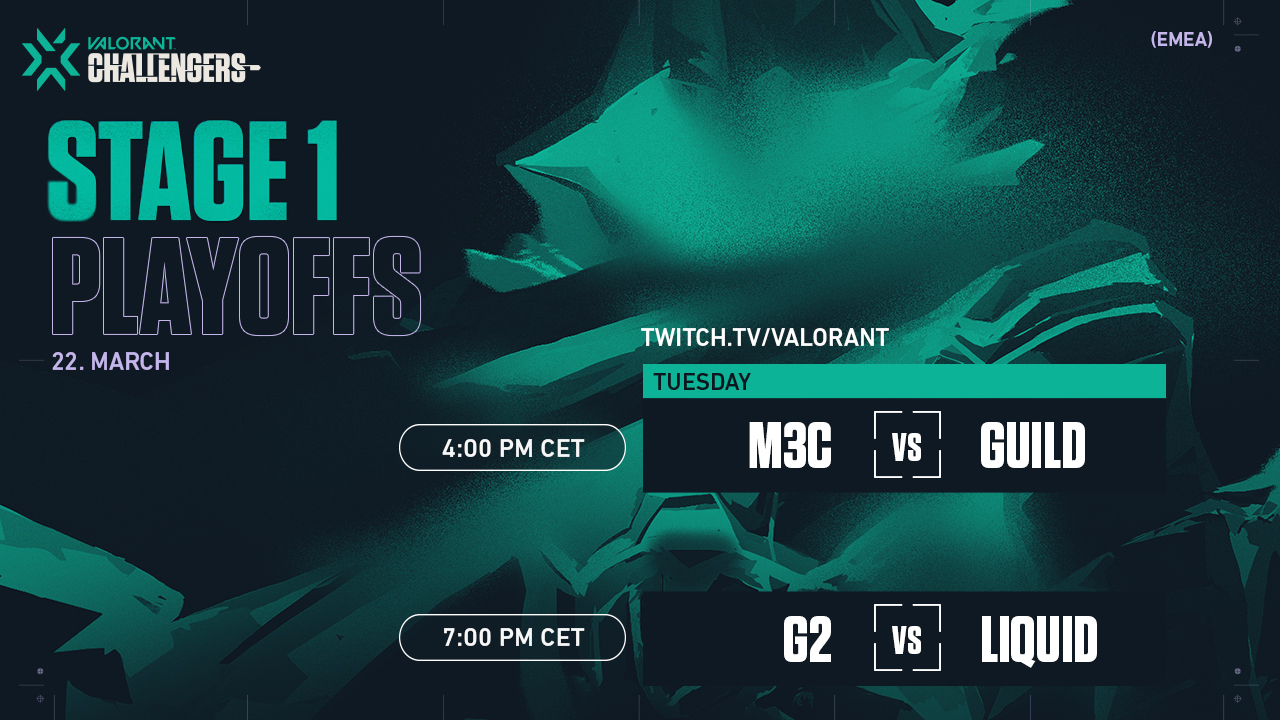 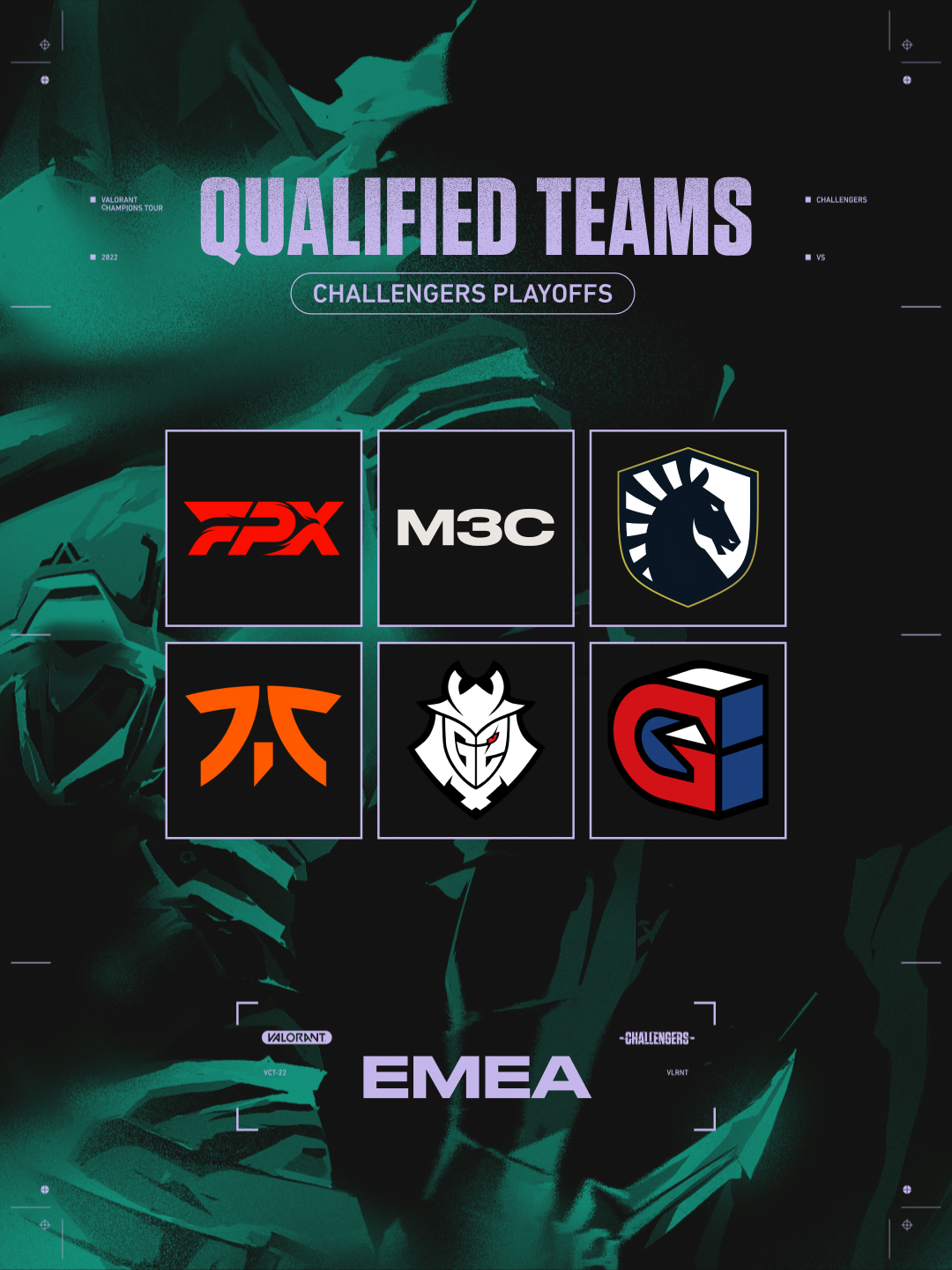 Despite circumstances forcing M3 Champions and the rest of the league to suspend matches, M3 Champions showed no lack in performance once they returned. They were as good as they looked heading into the Challengers Stage. M3 Champions are known for being the champions of the VCT Stage 3 Masters and placing second at the 2021 VALORANT Champions tournament, finishing just behind defending world champions in Acend. M3 Champions’ only map losses in the group stage were against Group A’s hot and rising team - FunPlus Phoenix (FPX).

Guild Esports was a big question in this year’s first Challengers event. After closely failing to reach significant heights in 2021, Guild decided to sign a new core to the team, bringing along former G2 controller Jose "koldamenta" Aranguren, Russel “Russ” Mendes, and Nikita “trexx” Cherednichenko in early January 2022 right before the VCT qualifiers. They topped the Europe Stage 1 Challengers Closed Qualifier with this new core, which granted them their spot at the Challengers 1 Main Event.

With a new patch, anything can happen. Looking at the names, recent results, and just plain statistics, M3 Champions should be able to take this series in a close 2-0 or a 2-1 with more resistance coming from Guild Esports. If Guild wants a chance at an upset, they’ll have to come up with something real quick that M3 Champions will be unable to handle, which is certainly achievable in this new meta.

G2 Esports has been a regular topic ever since the start of EMEA qualifiers, mostly due to their constant swapping between Wassim "keloqz" Cista and Oscar "mixwell" Colocho throughout the weeks leading up to the group stage. At one point, they announced they would be moving forward with keloqz, but then made a final decision by putting mixwell back on the starting lineup and releasing keloqz. G2 has since shown promise but still failed a win over Acend, who still failed to qualify for the playoffs.

Team Liquid has looked so close to finally solving their woes. They had great performances in the group stage but failed to convert victories against M3 Champions and FPX. Team Liquid has been one of EMEA’s finest since 2021, but a new name looks to topple the entire region, and Team Liquid has yet to find the answer to their problems, much less the answer to FPX.

The series could go either way and looking at this match on paper, it’s hard to predict who will come out on top. G2 has had time to perfect their newest plans with Mixwell, while Team Liquid has to fix their previous shortcomings or develop something better in this new update.

With their addition of Andrey “BraveAF” Gorchakov to replace Domagoj "Doma" Fancev, Fnatic has become an unstoppable force. They are the only undefeated team between the two groups, but their first true challenge most likely awaits from a team in Group A. Thanks to Fnatic’s top finish in their group, they are placed directly into the upper bracket semifinals of the Playoffs, where they will await the victor of M3 Champions vs. Guild Esports.

Fnatic is the favorite to win the whole event, or at the least, qualify to Masters 1.

FunPlus Phoenix
The surprise story of the entire group stage - FPX have been a dominant force, With showings such as a shocking upset against M3 Champions, a dominant showing against Team Liquid, and bringing each match close, but always ending on top. Well, apart from one outlier against LDN UTD, which was their only loss in the group stage. FPX, among with Fnatic are the favorites. Fnatic has shown clean dominant victories in their group, while FPX finds ways to outlast their opponents in the closest of games. Their journey in the playoffs will start in the upper bracket semifinals, but don’t be surprised if their results turn out as shocking as their group stage.