The International, or TI, is Dota 2’s premiere event. Some might even argue it’s the biggest event in esports. Such a prestigious tournament of course comes with it’s share of expectations. And after having run ten, very successful previous iterations, TI 11 brought with it a very different vibe.

While the Dota was excellent, with countless amazing series — including the longest game played in the history of any TI ever — there’s no doubt it was different to Internationals of the past.

We spoke with Team Secret CEO, John Yao, about the fact that this isn’t Valve’s “first rodeo”, as well as posing some questions to the boys during press day, to find out what the team thought TI 11 got wrong this year.

This was the first TI where there was a break between the start of the Playoffs and the end of the Main Stage. For some teams, that meant a total of six days between series.

Both team captain Clement “Puppey” Ivanov and Yao were vocal about the problems with TI 11’s long break between part 1 and 2 of the Main Stage event.

“It’s really bad, because you start not focusing on your objective, which is winning and playing Dota.” Puppey said. “You’re stuck in your hotel room, you’re eating the same food. You’re tired of it, you’ve already been here for a month and now you have a break… this is not a break for me, to be fair. I would want to finish this thing… you can’t relax, you’re stuck in a limbo.” He explained.

“I think it’s terrible,” said Yao. “I think a 2-day break is ok, to sort of reset to kind of clean your mental stresses and pressures from the playoffs… But I think having this long of a break it really kills momentum... You’re wound up and you’re under pressure but… it’s sort of like a good pressure where you’re ready to compete. And then you’re like it’s a six-day icer.” Yao explained, “I don’t think any of the other teams want to wait this long either.” 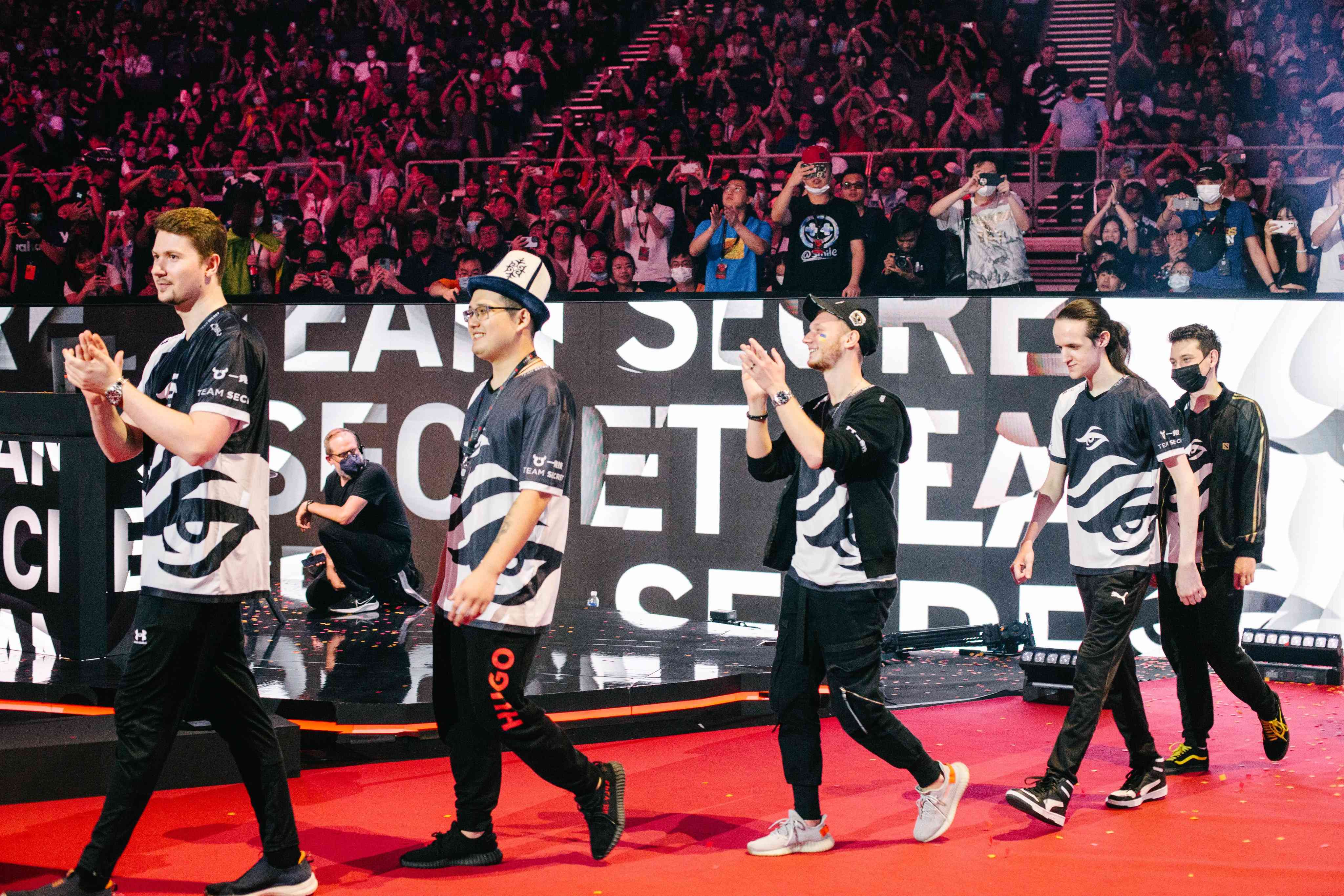 The long break wasn’t the only aspect which changes the atmosphere at this TI compared to others.
Unlike the previous Internationals, this year’s event has been split between two venues. With the initial main stage games played at Singapore’s Suntec arena, and the Finals Weekend taking place at the Singapore Indoor Stadium, a much larger venue with more room for a crowd.

We asked the team and Yao, how they felt about this change this year, and why they think Valve opted to go down this route.

“I think it would be better if it started right away from the big stadium,” said Roman "Resolut1on" Fomynok, “so every team got to play there, because it’s a really big experience for all the players… so it’s kinda bad that only 4 teams are going to be able to play in front of the big Stadium crowd.”

And Puppey feels the same.

“I mean since thinking of every TI, you literally walk into the area every time and then you’re in your booth, your booth! It actually feels like big and magical.” He said, before adding that he hadn’t “felt that this TI whatsoever because of this small venue... It’s a different vibe… it’s kinda like, losing the vibe.”

Could it perhaps have been covid and capacity regulations that made Valve opt to split the venue? Not according to Yao.

“I’m not really sure it was done for health reasons,” he said, “because it’s not like we have a strict bubble system at the hotel as it is, as opposed to previous events that were done at the height of the pandemic when we were super locked down… it’s definitely a lot looser than events that were held at the height of the pandemic.” Yao explained. “So, I don’t necessarily think it’s for safety reasons. Maybe that’s part of it. I think maybe it’s more for business reasons, but I don’t know for sure.”

Still, Yao agreed with his team that the split venue has changed the atmosphere for the players. “It definitely does take away some of the magic, I will say.”

But why no booths?

Another issue which cropped up at TI this year was the new open-air format. Something which caused problems with team communications. Fnatic’s co-owner Patrik Sättermon even announced the team were filing a formal complaint after Gaiman Gladiators were able to leverage information overhead from the casting booth as they played.

While Yao was confident Secret hadn’t had to deal with any similar issues. He was sympathetic.
“If these things are a concern, especially to non-English speaking teams that may or may not know what’s going on… we should do things according to best practices that we’ve learned in the past.” He said. “To me it’s a little shocking that we had this open-air sort of system. Especially because if safety is a concern, you would want to have closed off booths rather than open-air.” And as he points out, TI 10 had no spectators whatsoever, but booths were still provided for competing players. “I don’t know why they planned it out this way,” Said Yao. “I’m glad they sort of addressed it kinda quickly with in ears, but I think, I don’t think it should have been this way from the beginning, especially since you know this is not our first rodeo, we’ve done this a million times before, we know what works and what doesn’t.”

After 11 years of The International, Valve’s decision to forgo the presence of booths for players this year was a little bit baffling. But it wasn’t the only baffling decision we saw.

Moving away from the community?

But even for the fans at home, TI 11 was a different experience to previous years. There were production issues and delays on the Twitch streams. There was even a hiccup with the Twitch stream in the middle of Tundra and Secret’s Grand Final series.

The analysts and desk hosts weren’t even present in Singapore. Instead, they provided analysis from Norway, often resulting in their commentary being cut off as game’s got underway. And of course, the glaring elephant in the room — the prize pool.

"It’s kinda that shift in philosophy or that shift in mentality is one of the problems rather than the overall figure..." - John Yao, Team Secret CEO

Valve’s decision to split the battle pass into two parts proved to be unfavorable with the community, and TI 11’s prize pool only reached $18 million USD as a result. Less than half of the whopping $40 million USD prize pool we saw for TI 10, and TI 9’s prize pool, which was upwards of $30 million.

We asked Yao for his opinions surrounding Valve’s decision to split the battle pass, and what he thinks it means for community sentiment going forward.

“My own personal view of it, we know the TI prize pool is not going to go up every year, that’s just unsustainable.” Yao said. “I think it’s less about the actual figure and more about their philosophy on the prize pool distribution. Because before, in TI’s previous, they’ve sort of said they’re going to seed the prize pool with a million dollars… or whatever it is. And the community is going to support TI, through buying the battle pass and through leveling up and build the TI prize pool that way.”

Indeed, this is the way the battle pass and prize pool were handled at previous Internationals, and if the figures are anything to go by, in previous years, the community did support the event, and the players, through battle pass purchases.

“So, it was more like a community engagement and sort of like you were part of it, even if you can’t attend it because you made some purchases and you see the TI prize pool going up.” Yao explained. “And I think that kind of philosophy resonated really well with the community.” He said, pointing out that from a fan’s perspective, buying the battle pass allowed them to feel as if they were contributing toward one of esports biggest events, and an event that was central to the community.

“It’s not the number.” Yao said, “but if it’s like ‘ok we’re gonna split the prize pool in half or in two parts and we’re just gonna pocket half of it’ I think it kind of ruins the philosophy of it being community orientated, because then it’s like the mindset of a fan or a player ‘well I’m not really buying this battle pass to support my favorite players or my favorite event of the year anymore. I’m just buying it so I can give it to Valve.’ It’s kinda that shift in philosophy or that shift in mentality is one of the problems rather than the overall figure.”

Are all these issues a result of high costs? Perhaps. But even if it is, haven’t Valve committed to delivering a standard of quality at The International already?

“Valve have said themselves; we don’t care about costs for this event,” Yao pointed out, referencing Valve’s comments in the past about wanting The International to be as enjoyable and high-quality as possible. “So, if there are things that could be done better, then you know, you’re not doing it as good as possible… it kinda just contradicts that, a little bit.”

Tundra Esports walked away with the top prize at The International 11. Team Secret were the runner’s up, falling to Tundra after a 3-0 series at the Singapore Indoor Stadium last night.