What do we know about IHC Esports, the team that just made it to the Antwerp Major?

IHC Esports has upset the two undeniable favorites of the PGL Antwerp Major 2022 Asia RMR, TYLOO, and Renegades, and secured their spot at the Challengers Stage. Furthermore, this is the first Mongolian team to ever take part in a CS:GO Major. So what do we know about IHC?

Munkhbold “Techno4K” Sodbayar and Byambasuren “bLitz” Garidmagnai joined Checkmate in 2020, and it’s the first-ever team they’ve played on. Techno4K is one of the youngest players currently active in Counter-Strike and bLitz is the team’s captain and in-game leader. Batbayar “kabal” Bat-Enkh and Yesuntumur “nin9” Gantulga are the oldest players on the squad, at 26 and 24 years old, respectively. The duo has been playing together since May 2019, playing under six different tags since then (Mazaalai, AUGUST, TIGER, Team Renewal, Checkmate, and IHC). Tengis “sk0R” Batjargal, the most recent addition to the squad, is touted as one of the best upcoming players in Asia. He has played in a few Mongolian teams, namely D13, before gaining international experience and joining Team NKT in June 2021. 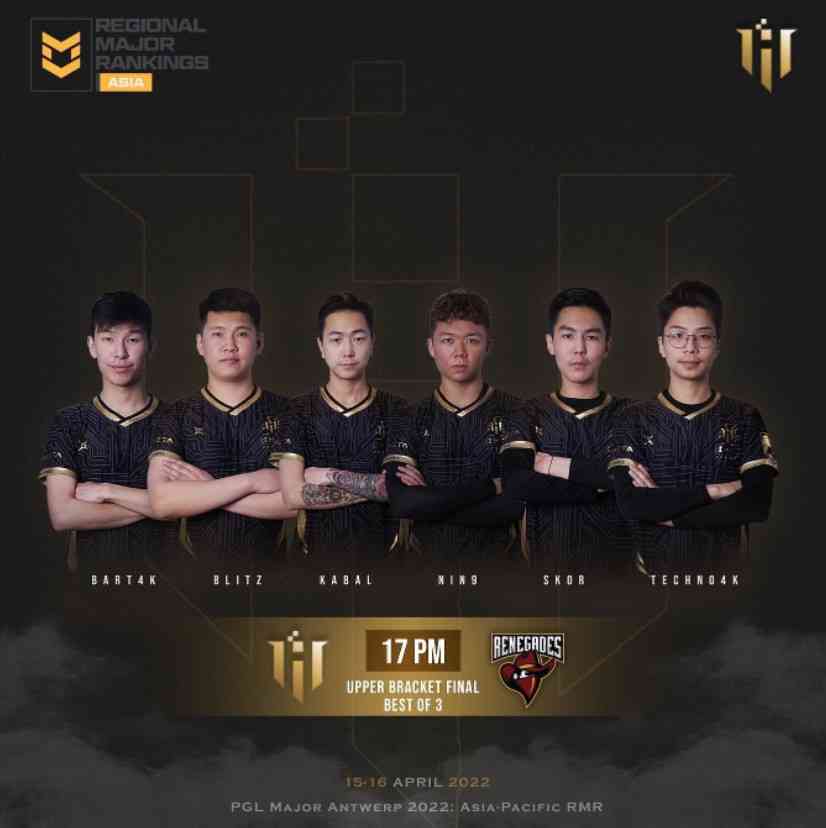 IHC is also one of the few squads still running a six-man lineup, with Batbold "Bart4k" Baatarkhuu currently listed as a substitute for the upcoming Major. The team is coached by Erdenedalai "maaRaa" Bayanbat, a veteran of the Mongolian scene who has played for the likes of The MongolZ, Storm Rider and Mazaalai in the past. The roster has been quite successful within the Asian scene during its time under Checkmate, but with the lack of opportunities to play on the international stage, the PGL Major will be the team’s biggest challenge to date.

The Asia RMR is the team’s third event under the IHC banner. They took second place at MESA Nomadic Masters: Spring 2022 and third at ESL Challenger League Season 40: Asia-Pacific, narrowly missing out on the opportunity to qualify for European events on both occasions.

The Mongolians may have surprised the general public, but their success was not just a lucky break. IHC didn’t even lose a single map during their run in the RMR, with ⁠sk0R and ⁠bLitz being the highest-rated players during the event, averaging 1.34 and 1.31 ratings, respectively. TYLOO lost Mirage 13:16 with the Mongolians claiming ten rounds on their T-side. Ancient was a closer affair, ending 19:16 in the favor of IHC, with the team claiming 11 solid rounds on the defensive side. Versus the Oceanic side of Renegades, IHC picked up the first win 16:10 on Inferno and demolished the Aussies 16:4 on their own pick of Mirage.

IHC has a very strong map pool with Vertigo as a permanent ban; they played it once at ESL Challenger League Season 40 Asia-Pacific and lost to TYLOO 4:16. Their most popular map picks are Inferno and Mirage, being played 13 and eight times, respectively. IHC has a 76.9% win rate on Inferno, which is their main first pick, and 87.5% on Mirage. Furthermore, the team hasn’t dropped a map on Nuke, Overpass, and Ancient; and has four out of five successes on Dust2. The numbers are very impressive, but the quality of opponents in Asia is quite low when compared to Europe.

IHC is mostly successful in rounds with a 60.5% win rate. They also convert 88.6% of the second rounds after winning the pistol rounds and 23.8% after losing the first round. Another point that lets IHC gain wins is the utility usage: the squad has 25.2 ADR with HE grenades, Molotovs & Incendiaries added to 0.28 flash assists per round. Furthermore, IHC has a 77.7% win rate after getting the first kill and 33.8% after giving up the first death. All these stats show that this team is ready to take the next step. They’re one of the best teams in their region and are ready to take on much stronger international competition.

IHC is a great prospect to reach the Legends stage at the Major; they play an active and confident brand of CS with many pushes and lunges in their defense. This is a young team with an average player age of 21.9. They have an ambitious organization that allows them to play CS full-time and concentrate on improving. After years of having TYLOO as the main Asian representatives, we may finally have a new contender to consistently bring Asian CS to the international stage.