What's Up With Entropiq?

Entropiq have failed to qualify for the upcoming PGL Major Antwerp 2022, going 1-3 in the European RMR B. The team, consisting of Aleksey "El1an" Gusev, Viktor "Lack1" Boldyrev, Aleksey "NickelBack" Trofimov, Vladislav "Krad" Kravchenko, Igor "Forester" Bezotecheskiy and Dmitriy "hooch" Bogdanov, hasn’t had the best start to the year, especially when compared to their performances in 2021.

They were the ninth most active team last year, having played 305 official matches and averaging a 1.09 team rating. They won a number of A and B tier events, such as Funspark ULTI 2021: Europe Season 2, Malta Vibes Knockout Series #1, and Pinnacle Fall Series #2, resulting in over $270k in prize earnings. Needless to say, they were the kings of Tier-2 and were well on their way to contest with the best, so what has changed? What’s up with Entropiq?

Entropiq peaked at #9 in HLTV’s World Ranking in November, following an impressive performance at the PGL Major Stockholm 2021. The team took wins over the likes of Astralis, Heroic, and even Gambit Esports in their Major run last year, but fell short at the final hurdle, going 2-3 in the New Legends Stage after advancing 3-1 from the the New Challengers Stage. Following their Major run, they went on to win the aforementioned Pinnacle Fall Series #2 and have some deep placements in their final events of the year, marking the end to a rather successful 2021. 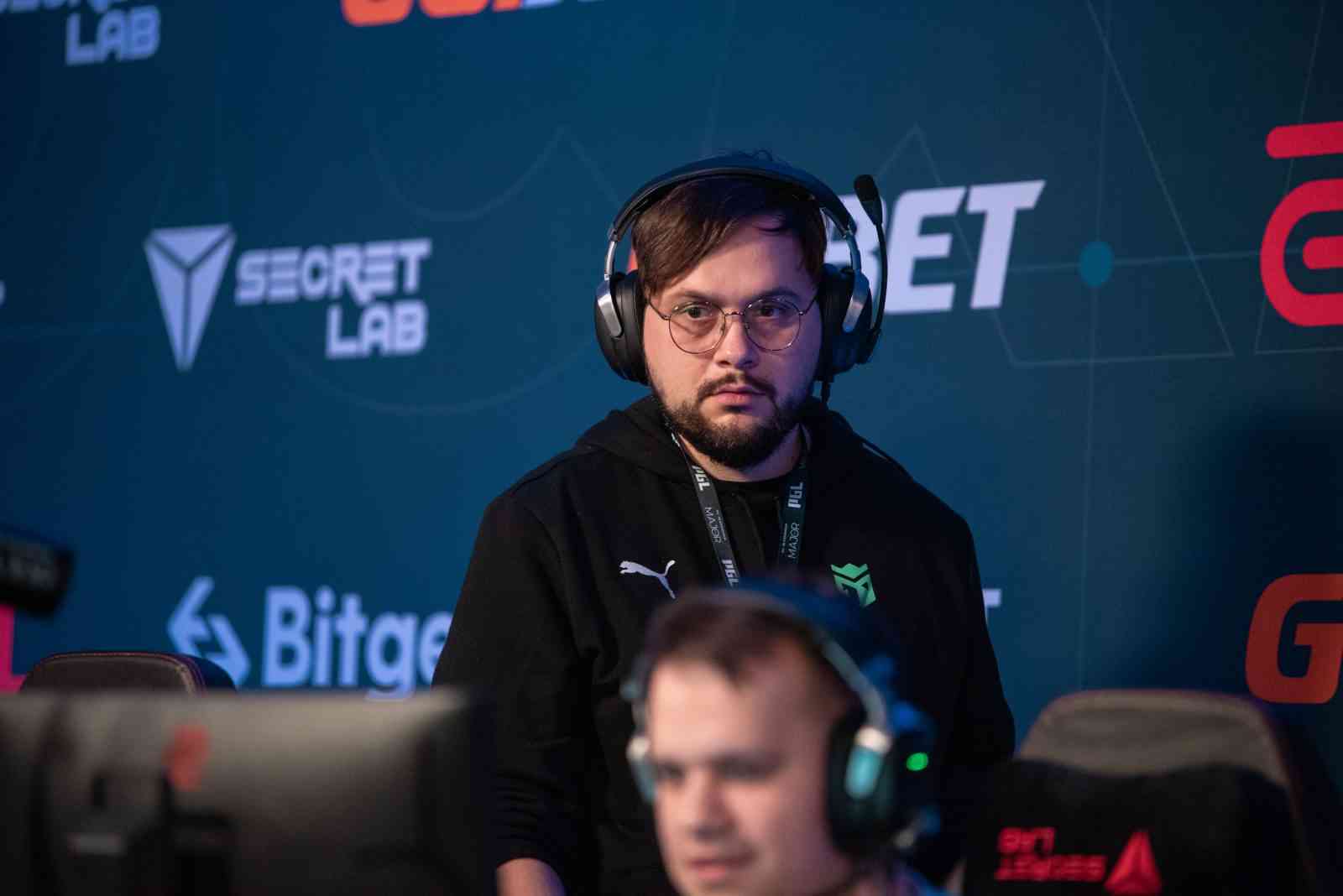 hooch with Entropiq at the PGL Stockholm Major (Credit: PGL)

In all fairness, it’s not as though Entropiq have been terrible this year either. They reached #9 once again in March and are currently sat at #14. They’ve taken maps, and even series, off of strong teams like G2 Esports, but it’s the kind of matches that they're losing that’s worrying. Despite grinding together for so long and finally reaching Tier-1 level, the Russians have bombed out of all their big events this year.

At IEM Katowice 2022, they lost their initial matchup versus ENCE, bounced back in the lower bracket versus Renegades, but lost to MOUZ right after, placing 17-20th in the end. Things looked more promising at ESL Pro League Season 15 as they went 4-1 in their group, only losing to Ninjas in Pyjamas, but they were knocked out of playoffs after losing 1-2 to Astralis in an incredibly close series. The recent run at the RMR comes as just another tough blow for the team, as they miss out on the biggest event in this half of the year. To top it off, they’re also yet to actually win an A-B tier event this year, despite coming at Funspark ULTI 2021 in January.

So what’s happening? Why are Entropiq failing to close out such tight series? One of the main differences has been El1an, who is usually a huge difference maker for Entropiq. While he’s not been terrible by any metric, he’s just not been his usual self, and has failed to live up to the standards he established last year. The AWPer has been an integral part of Entropiq’s success, and having him go missing during these important events and series has especially harmed the team. 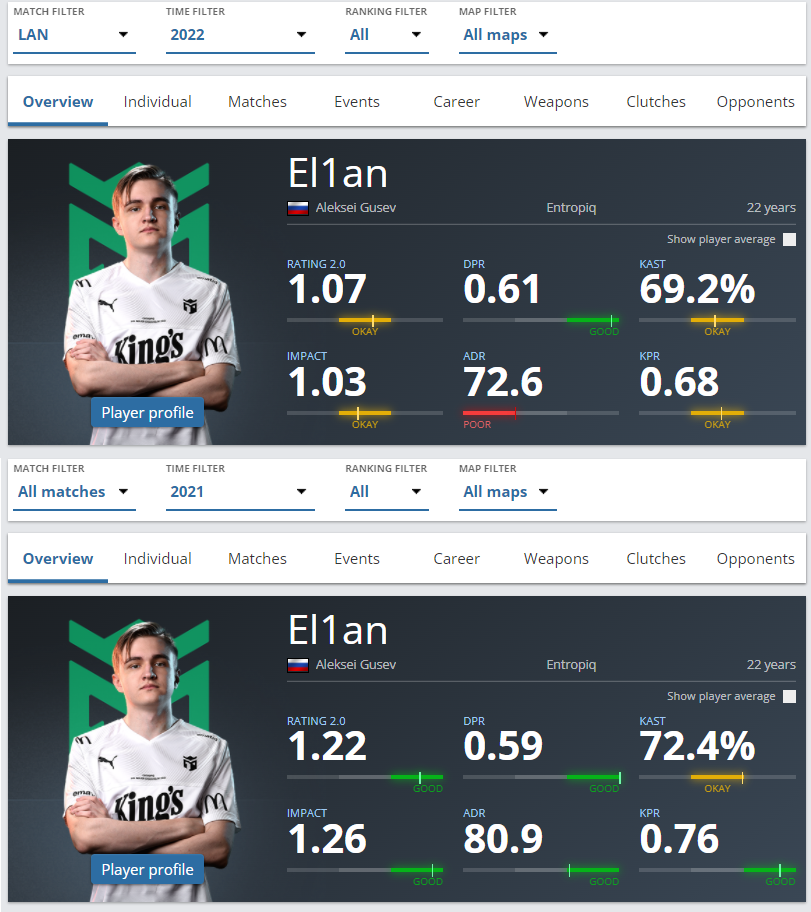 This isn't unusual by any means, as new AWPers usually tend to do quite well for a short period of time when first entering Tier-1, given that they’re an unknown quantity to other teams. After a few months, rival snipers get used to their peaks and opponents start anti-strating to counter them, so the newcomer’s performance tends to drop quite dramatically. This could easily be what El1an is going through, but that doesn’t change the fact that he’ll really need to turn things around soon. You just can’t have a weak AWPer in the year 2022, and while we know what El1an is capable of, he just isn’t holding his own right now.

On the rifles, Forester and Krad have stepped up to the plate and have actually outperformed their 2021 averages. They’ve both had very impactful rounds and great maps, but neither of them have been uber consistent across multiple series. They’re both incredibly strong riflers and have played quite well so far, but with El1an missing, they need to turn it up a notch to compensate.

Meanwhile, Lack1 has slightly lagged behind his 2021 average. Arguably, his role on the team isn’t to frag, it’s to create space for the star trio of El1an, Forester and Krad, but when the stars aren’t showing up, real problems start to arise in Entropiq’s system. He’s a decent entry fragger and occasionally takes over a map, but he’s no third star, and can’t really make up for El1an’s disappearance.

Whenever a team is struggling, it’s up to the captain to steer the boat back in the right direction. NickelBack has never been an outstanding rifler, but he’s always managed to hold his own. This lineup has been together since January 2021, and in large part thanks to NickelBack’s leadership, the team has been able to slowly climb the ranks. Currently, the IGL is experiencing a rough patch averaging a 0.94 rating at these big events. If he isn’t able to step up individually or at the very least lead his team to victory, NickelBack may very well be at risk of being cut in a few months. 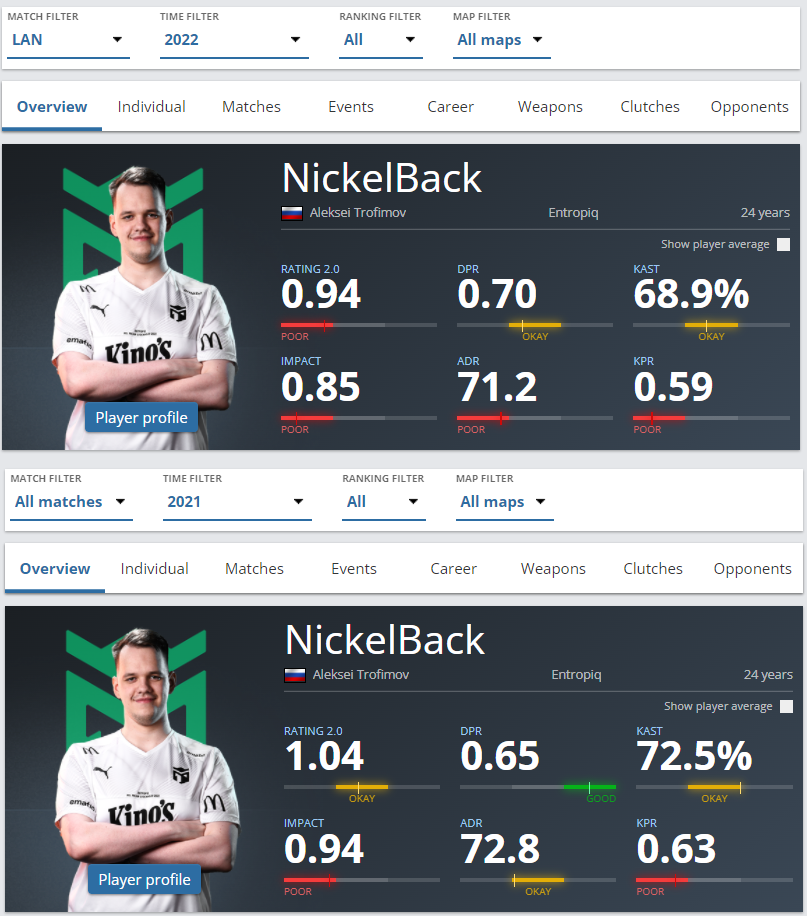 It may seem drastic, as Entropiq isn’t even out of the top 20 yet, but roster changes aren’t inevitable. As mentioned, this team has been together for a considerably long time, and while that could play to their advantage, it’s a double-edged sword. On one hand, their experience together can allow them to talk things out, come up solutions and work together as opposed to against each other, pointing fingers and shifting blame. On the other hand, maybe this iteration of the lineup has reached its full potential, and to go further, changes are needed.

In either case, Entropiq as an organization, finds itself in a rough spot. The Czech org currently fields four different lineups: the main Russian-speaking team, the Czech-Slovak Entropiq Prague which was the main team prior to signing EPG Family, Entropiq Future which serves as EIQ Prague’s academy, and Entropiq Queens which is the org’s Polish female lineup. Of these three other teams, Entropiq can’t promote any players due to the language barrier, and would be forced to search externally for players.

This could prove to be difficult, although not impossible, considering the war between Russia and Ukraine and the associated sanctions on Russian companies. Gambit was able to sell its lineup to North American organization Cloud9 through Norwegian agency ULTI Agency, meaning that there are definitely workarounds. So who could Entropiq get?

If Entropiq was looking to replace El1an, one player to keep an eye on would be 1win’s Denis "deko" Zhukov. He’s another AWPer that has really made a name for himself by outshining everyone else in the Tier-2 and 3 scenes, but would it be worth taking a gamble on another inexperienced sniper? Realistically, probably not. Entropiq are unlikely to actually bench their star player for another uncertain prospect. What deko has achieved is certainly impressive, but El1an could do just the same. The team needs to work on getting their AWPer adapted to the level and creating even more space for them to operate.

Replacing NickelBack would also be quite difficult, as good in-game leaders are hard to come by. One name that comes to mind is Vladislav "FinigaN" Usov, currently of AVANGAR. The 23-year-old has a decent amount of experience under his belt, previously playing for ESPADA and CrowCrowd, and has been performing quite well individually since joining the Kazakh organization. That said, FinigaN also lacks Tier-1 experience, and while he may bring a slight increase in firepower over NickelBack, the gamble on a completely new leader may be one Entropiq is unlikely to take. 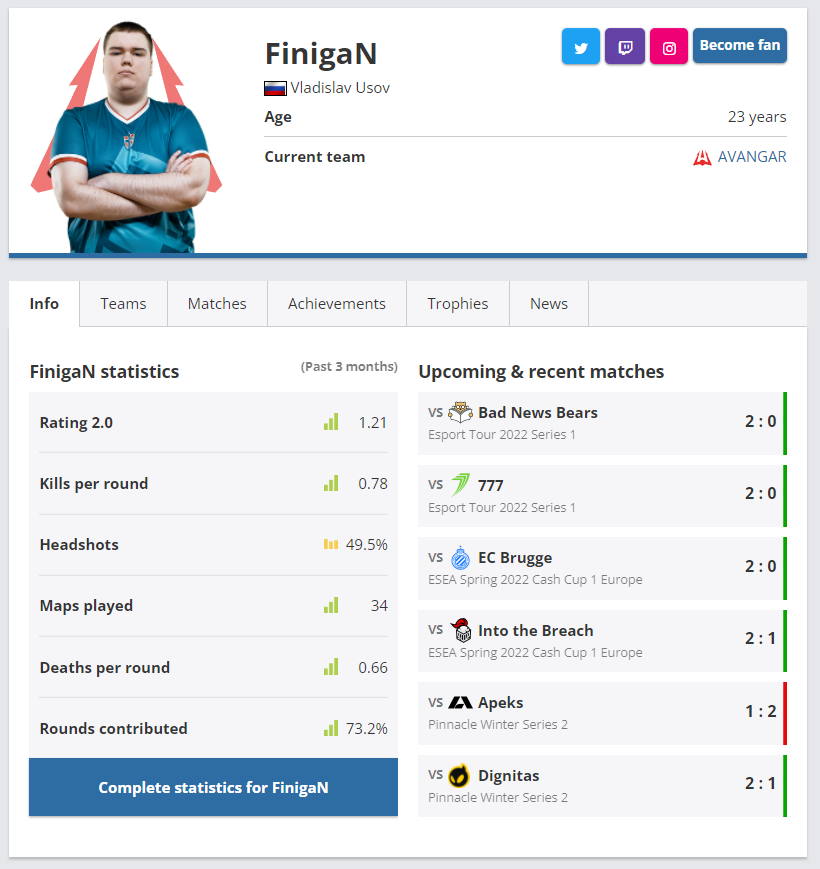 FinigaN’s stats over the last 3 months (Stats by HLTV.org)

This leaves the riflers as the main candidates for replacement. Entropiq could potentially look to replace Lack1 with another aggressive rifler. The team had Nikolay "mir" Bityukov listed as their substitute for EPL S15, and while a buyout from Team Spirit would be necessary, mir doesn’t seem to be part of the Russian organization’s plans for the future, so it’s unlikely they would intentionally complicate his transfer.

Another aggressive rifler would be Mareks "YEKINDAR" Gaļinskis, as he would require less space to operate on the team compared to mir and could easily create room for the other players to shine. There’s always a possibility that VP parts ways with its lineup considering the state of the world, meaning that YEKINDAR would be a free agent, but it’s very unlikely. While YEKINDAR is Latvian, thus somewhat easing the signing process compared to Russian players, Entropiq would still likely need to deal with Virtus.pro, an organization not particularly known for their ease of transfers. A case could be made for Belarusian rifler Ihor "lollipop21k" Sołodkov, but he is similarly stuck in a contract with Nemiga Gaming. 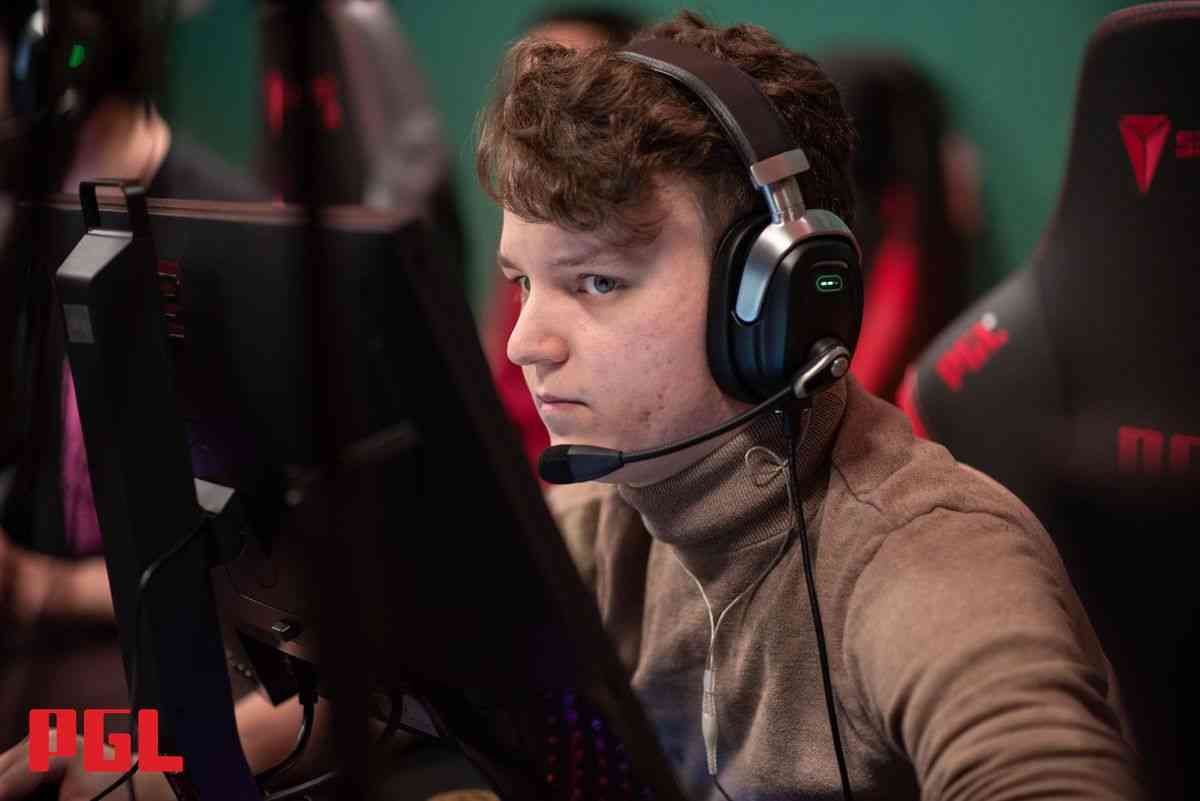 YEKINDAR at the EU RMR A (Credit: PGL)

Lastly, Entropiq could attempt to sign some younger riflers with lots of potential, such as Evgeniy "Aunkere" Karyat, Aleksandr "KaiR0N-" Anashkin, or Konstantin "Raijin" Trubarov, but that would once again be taking a gamble on firepower while hoping that it can carry your further than experience.

At the end of the day, there’s no need for Entropiq to panic… yet. The team has worked through issues in the past, but overcoming the hurdle into Tier-1 is no easy task. Management may very well give the players more time to fix their mistakes, and come up with solutions, but there are already a few red flags popping up. El1an needs to find his groove again, NickelBack needs to get his troops in order, and as a team, they need to stop choking in high pressure games. Otherwise, there’s a very good possibility that a few people get cut from the lineup and replaced by some of the names above, especially in the post-Major shuffle.

Who knows, maybe even Natus Vincere will make changes after Antwerp considering the organization has implied that it wouldn’t continue working with players based in Russia.