One thing is certain, Brazil is a machine when it comes to minting new talents in Counter-Strike. Old idols and Major winners are getting older and new blood is coming, eager to show their game and find opportunities at a higher level.

Because of these reasons, it is crucial to mention the work made in Brazil to develop talents, such as academy teams and lower tier tournaments. Kaike "KSCERATO" Cerato is the main example of young blood that came from an academy. While in FURIA, others made their path in a similar way like Vinicius "VINI" Figueiredo, Rinaldo "ableJ" Júnior and André "drop" Abreu more recently. Without the chance to debut in the first team, other players had the experience in FURIA Academy but found success in other teams like Matheus "Tuurtle" Anhaia, Vinícius "n1ssim" Henrique, Lucas "honda" Cano, and Antonio "realziN" Oliveira. Furthermore, an increasing amount of organizations have joined in on the "academy system," like MIBR, GODSENT, LOS GRANDES, and many other organizations in Europe currently competing in WePlay Academy League.

I had the opportunity to highlight some young talents before and today I’ll add some names to the list for all Counter-Strike fans to look at. Eduardo "dumau" Wolkmer, Bruno "latto" Rebelatto, Mario "malbsMd" Samayoa, Santino "try" Rigal, Vinícius "v$m" Moreira, Bruno "b4rtiN" Câmara, David "dav1d" Maldonado, Allan "history" Lawrenz, and Kaue "kauez" Kaschuk were some of the names.

He’s only 17 years old and, without any doubts, he’s insane already. Lucas was only 15 when he started his career with Alma Gaming in 2019. At the time, he was also playing Clutch Circuit, the major league in Brazil. Since then, nqz has gained my attention. His evolution has been very curious because I didn’t see him as an AWPer and he’s now an excellent and more mature player with the sniper in his hands. In B4, nqz showed that he was ready for the next level and 9z called him to succeed Luca “Luken” Nadotti.

In his first tournament with the Argentinian organization, he played against forZe and FURIA; he didn’t feel the pressure to play against these top-tier teams. 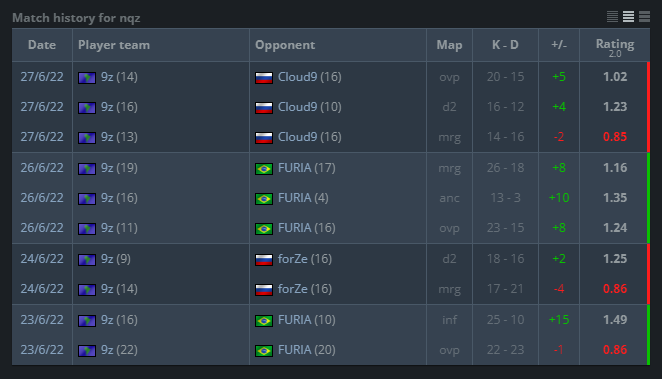 Following some earlier experiences, t9rnay found a new home in B4 to show his game. B4 suffered some significant losses such as Lucas “nqz” Soares and Rodrigo "drg" Ausenka being bought out by 9z and Sharks Esports, respectively. Regardless, t9rnay has taken on the star role in B4 and has already attracted the attention of other teams.

t9rnay is a rifler and shows a good capability with pistols as well. It’s still unclear if the team and, more specifically, t9rnay, would feel the pressure to play against top-tier teams since the roster hasn't had that kind of opportunity yet.

Victor is 20 years old and another AWPer with a lot of potential. He joined the Argentinian organization Isurus at the beginning of 2022 after a great year in SWS Gaming. It’s important to talk about SWS, which revealed some talents in the past year. Richard "chay" Seidy joined Sharks, and for me, another player that has a lot of potential is João "matios" Guedes. matios also joined Sharks but it was clear that he didn’t fit in the team and was signed by B4 two months ago. João is a rifler with huge potential but he’s still missing some consistency in his performances.

Gafolo was chosen to replace Gabriel "nython" Lino in Isurus and the team isn't currently in its best form. However, Isurus was able to reach the quarterfinals in Pinnacle Cup IV in one of their first moments in Europe. Gafolo, much like matios, is still trying to perform consistently and, without a doubt, he has potential.

Time is key for a talent like him. In my opinion, it’s still too early to talk about the level he might reach. He’s an AWPer, currently in SWS, and is showing some interesting things in the server which I’m really liking. He shows aggressivity and courage in some moments which shows that he can be a great player in the future.

Like other players, he also needs consistency in his performance, and SWS could be the perfect team for him to find it.

There are numerous factors which make it impossible for any player to succeed in the game, affecting their careers’ trajectory. I would say, the potential is there; the rest is the rest.