After the reveal of the four new Northern Realms cards, it is only natural that we get four new Nilfgaard cards the day after. It seems that CDPR is trying to give Nilfgaard a new archetype, so let's get into it to see what it is all about.

Remember that the values of provisions and strength are still subject to change until the official release on October 4th. 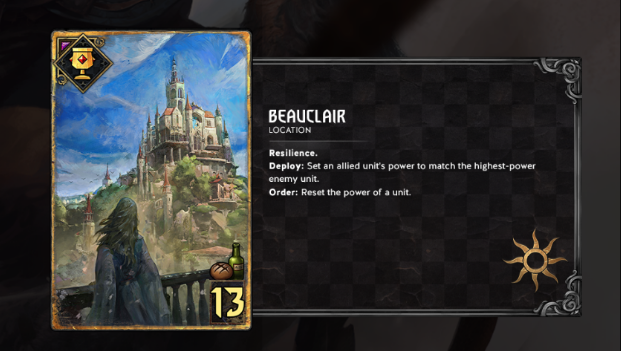 In this Witcher universe, Beauclair is the capital city of Toussaint, surrounding the Palace of Beauclair. In the final expansion for The Witcher 3, Beauclair is presented as a sizable city on the shores of a nearby lake called Seidhe Llygad.

But let's look at what this card does in Gwent. As hinted before, this card is a location that costs 13 provisions. It is somewhat expensive, but it could generate well over 20 points in certain matchups. Since this card has a carryover, it could be an excellent decision to go to long round three, especially if you have the last say. However, Nilfgaard already has a lot of tall punish, so we will have to wait and see if this card will find its place in the meta. 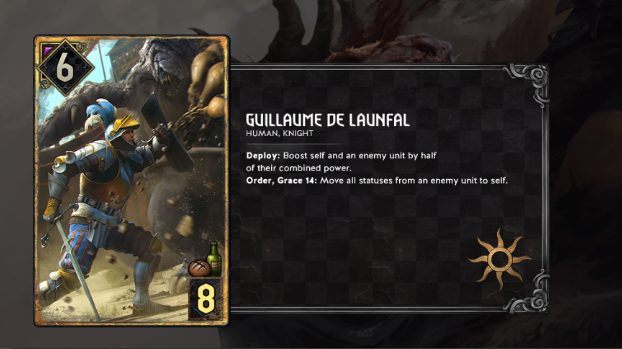 This card has two aspects to it. Deploy and Order. It seems that the deployment aspect of the card is utilized to help it reach Grace 14, which is needed to activate the order ability. In some sense, this card gives a control option. For example, if the opponent has a defender on board, this card will remove status from that defender and put it on itself. Or it can even remove resilience status from a unit and play for a much higher value with the carryover. Nilfgaardian knights could have good synergy with this card, as can Ivar Evil-Eye for a big point swing. 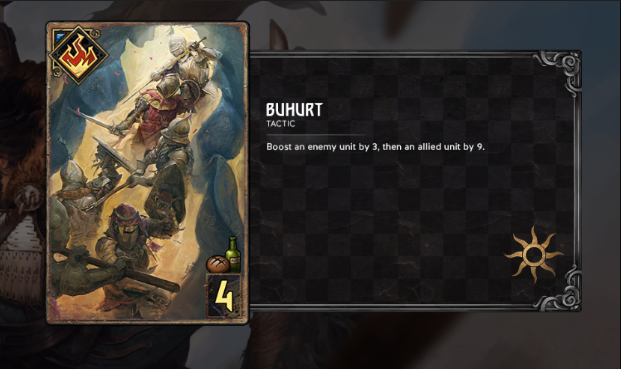 If you read this as Butthurt, you are not the only one. But that is beside the point. Nilfgaard got yet another excellent bronze tactic card. It is a 4 provision tactic that plays similarly to Mardrome, except you boost the unit by 3 points instead of damaging it. This card will probably be best utilized in a Cahir deck. However, since Nilfgaard has a lot of tall punishment, it could be an auto-include card in the next season. 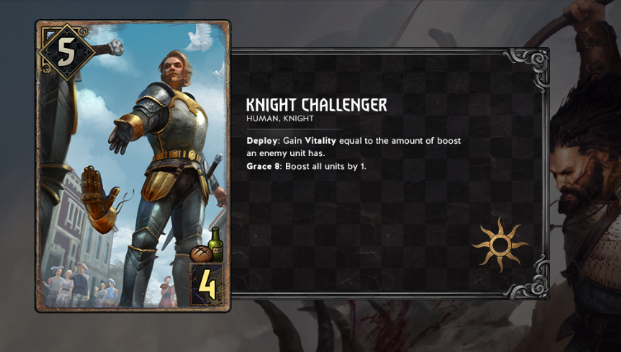 It is not a secret that Nilfgaard has underwhelming bronze engine cards; however, this card, at four provisions and five power, might just change that. This card has six strengths on deployment by the time the opponent can answer it. It could be a replacement for Yennefer or even an addition for Cahir decks. Moreover, combined with Standard bearer, you could very well generate a lot of points with bronze cards.