dev1ce: ”I wanted to go to Astralis; it was more when I was ready to go back”

In this 2 part article, we sat down with Astralis' dev1ce to talk about his return to competing in LAN and rejoining Astralis. Check back tomorrow for part 2!

Hugo "TheSwedishJoker" Nilsson Meier, BLIX.GG: You’ve had a long break from LAN competition. How are you keeping yourself in shape?

Nicolai “ dev1ce” Reedtz: I’ve been playing a lot of FACEIT; when I started my break, I think I had two months of CS, but other than that, I just grinded and played FACEIT for a long time. Other than that, obviously, with the team now, it’s been a tournament or two, online tournaments, and just practice with the team.

Other than that, it’s just watching the meta develop, I think, watching some of the AWPers that really shape how it’s played right now. I think m0NESY is one of those guys I watch a lot, and yeah, that’s basically how I keep up. Now’s the real test.

Check out our recap on dev1ce's time in NiP here.

BLIX: How’s it been so far for you to get back to playing in a team? because it has been a while since you were with NiP.

dev1ce: It’s been really enjoyable, obviously a bit tough, but enjoyable. You have to put in a lot of hours to get back to a decent individual level, and it’s a fun challenge; it’s fun to be with familiar faces and in Denmark as well.

It’s been fun, and the journey is, for me, the most important thing to enjoy the journey and to have fun while you’re grinding; otherwise, you focus too much on the trophies and the wins, and it becomes a bit stale. Even though it’s been tough, I find it fun.

dev1ce: I mean, the question wasn’t which team. I kinda knew I wanted to go to Astralis; it was more or less for me when I was ready to go back; did I want to go back to CS competitively? What goals do I have with CS? Because there were also a lot of other options outside of CS.

BLIX: Do you think that Astralis is the same now compared to when you left, or have there been any changes that you’re surprised by right now when you come back?

dev1ce: I mean, the team is not the same. There are a few changes there, playing with blameF and now Buzz as well, so that’s a difference. Other than that, I think the general view on Astralis probably changed a bit, the team's perception. When we were playing teams back then, people were always a bit.. not afraid, but they at least had some respect.

I think now that people have seen that the team has lost a lot of games against teams that they wouldn't normally do, maybe there’s a bit less of that, and that’s just how it is in the sport. It changes quickly, and it’s just our job to get back to the level we want to be at. BLIX: HUNDEN was recently announced as the new analyst. How’s it been so far working with him?

dev1ce: HUNDEN is actually a big surprise for me. I’ve known him since Source since I was 12; I think how he’s really smart in CS and really good at teaching. For me, it’s been the first time in probably five years that I feel I’m learning something every day since he joined, so that’s something that’s totally new to me and really nice. I think he works hard and just wants to prove that he belongs in the scene, and he’s creating a lot of value for us in the team.

BLIX: What would you say makes him valuable, and how do you feel he differs from other coaches and analysts you have previously worked with?

dev1ce: I mean, he has a good CS mind; he compares a little bit to zonic in that regard, they think a lot of new stuff, and they kind of see the meta before it shifts and all that, so I think in that regard he creates a lot of value, and he has a lot of experience as well as a coach.

I think you see in many teams right now you’re changing coaches that come with a little bit less experience, but they’re maybe more hungry. I think he’s also experienced and hungry, and working as an analyst for us, he’s just really good at providing valuable information and not too much; too much information sometimes in a CS player’s head can become overwhelming because you have new opponents all the time, so it’s more or less creating the right amount of valuable information, I think he’s really good at that.

BLIX: Do you think his past is affecting the team somehow? We all know the whole scandal with Heroic and everything. Does it have an effect on the team knowing what he did before?

dev1ce: I mean, it definitely doesn’t have an effect on the team, but maybe on the global CS:GO perception of the organization, it might have an impact. I’m not too involved with social media, actually.

The whole fuss there, so I’m pretty sure things have been a little crazy, but for us in the team, we’re just focused on the human he is and the values he comes with. For me, he’s a really good person, and I have nothing bad to say, so I’d rather make my opinions of people when I meet them rather than just the public opinion.

BLIX: Were you and your teammates involved in the decision, or is it more the org that says, “hey, HUNDEN is free, let’s take him, let’s bring him in”?

dev1ce: I think it’s not the players; at least I was not involved, and I’m pretty sure none of the other players were involved. When we brought in Buzz, I played a lot of FACEIT with him, so Casper, our sports director, asked me a little bit about him, but he didn’t ask me, “should we get him?”. Maybe the same happened with HUNDEN and other guys who knew him better. I didn’t know him at all, so…

dev1ce: I really believe in Buzz; I think he’s good. I don’t think you can set a limit on what he can achieve. He can be one of the best players in the world in his role for me, so that’s what I kind of expect from him. It’s going to take some time, but I really do think he has the right mentality and talent, so if you mix that, it’s a good mixture. I’m just excited to be playing with him.

BLIX: How’s the practice been like coming into the event? Obviously, there were the holidays, but how has it been afterward? What did you guys do?

dev1ce: So, we worked on setting some goals and creating an identity for the team in-game and out of the server, how we want to treat each other, and all of that. Other than that, we’ve been working on the server and shaping our map pool since Anubis is in there, so that’s like the work. Practice has been going good. It’s always up and down because you’re testing stuff out. I would say we’re pretty ok on most maps and pretty happy with the level we’re bringing for the tournament. 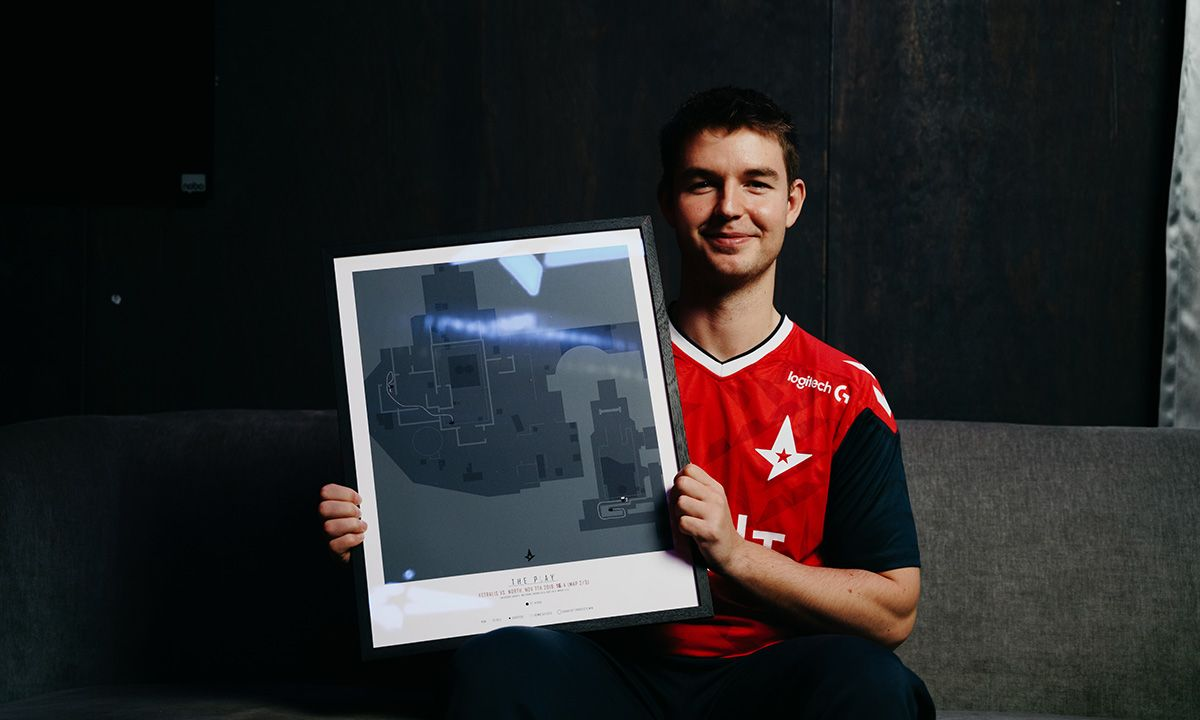 BLIX: You guys will start against Vitality with your old teammates zonic, dupreeh, and Magisk. You’ve obviously played against them in NiP, but do you still have that rivalry, maybe even more intense now that you’re in Astralis and with your current teammates in Xyp9x and gla1ve?

dev1ce: I try not to focus too much about who we’re playing against, but yeah, it’s gonna be fun, and for me, it’s also just my first match back, so there’s a lot of things to think about before I have to worry about all of that stuff. So no, not really.

I look forward to seeing them because it’s been a year since I’ve seen them all, and it’s really nice to see so many familiar faces. But when we’re playing, I don’t bring 10% extra if it’s Heroic, Vitality, NAVI, or whoever it is. It’s just another game, and you have to be 100% focused and use all of your energy no matter what. And yeah, obviously, I hope we can win.

BLIX: As I mentioned before, you’ve been away for quite some time from the competition and have been pretty quiet on social media. What do you think we can expect from you in the game? What do you think you’ll be able to bring to the table?

dev1ce: I mean, in my first tournament here, I’m just gonna take it pretty slowly, I know that my individual level is good enough, it’s where I want it to be, so it’s about controlling the nerves and expectations a little bit, and for myself, I’m just trying not to lower them too much but not expect something wondrous as well.

So I’m just gonna take it one match at a time, and I’m gonna do the same stuff that I’ve been doing in practice, and that’s been good, so hopefully, I just hit my shots, and that’s how it is as the AWPer.