DRX Zeka: “Now that I am playing with BeryL and Deft, they were teaching me so much stuff I didn't know about the game.”

DRX has been firing on all cylinders so far in the 2022 League of Legends World Championship Play-In stage. Having won their first four games in the competition, of which included them defeating reigning MSI champions Royal Never Give Up, the team has already exceeded fans’ expectations which saw them languish beneath the favorites.

Among the players who made DRX’s initial results possible was mid-laner Zeka, who posted a 27/2/22 total KDA within all games as of Day 3 in Play-Ins. The 20-year-old Korean player started his career in 2019 as a member of the KT Rolster Academy squad and went on to play in the LPL from 2020 to 2021 for Vici Gaming and Bilibili Gaming respectively.

It was there in the Chinese league where Zeka built a reputation as a good mid-laner who held the potential to be even better than what he already is, and thanks to that, he signed with DRX for the 2022 season, which ultimately led to a Worlds berth.

Following DRX’s match against Isurus Gaming, Zeka spoke to BLIX.GG to discuss his experience in the World Championship, his assimilation with DRX, his time in the LPL, and much more.

Pedro Romero, BLIX.GG: Twenty-seven kills, two deaths, and twenty-two assists: that is your KDA after four games in Play-Ins. How have you viewed your performance so far in this competition?

Kim "Zeka" Geon-woo: For me, playing is just one of the steps I'm taking in my development so I wish I can show more of myself in the group stage and perform better there.

BLIX: You've always made it known throughout the season that your main goal was to reach Worlds. It's one thing to visualize appearing in this competition but it's another to actually realize it, so how has it been for you to finally reach this goal of appearing in the World Championship?

Zeka: My first goal was to advance to Worlds and I managed to accomplish that, but I didn't want to get too excited about it. Now that we are performing at Worlds, I just want to do better so I'm just trying my best to work as hard as I can.

BLIX: Your head coach Ssong said in a press conference that he looked towards you as the one particular player he believes will outperform the rest of the competition in Worlds. How have you been able to maintain a gradual improvement throughout the season?

Zeka: Until last year, I was performing at LPL so when I moved to the LCK, I had a bit of a hard time adapting to the new league. I want to say the spring split was pretty disappointing, but after that, coach Ssong taught me so much about the game so I was able to grow so much.

Zeka: I also think I performed better in summer than in spring every time. I think it's because I sometimes have a hard time adapting to the new surroundings and I got to learn a lot from spring, which I then capitalized in summer.

BLIX: By joining DRX, you became acquainted with experienced players which have garnered multiple Worlds and LCK finals appearances. As the newest member of the team while also being the youngest player, how have you fit into the team’s culture throughout this past year and how has it different from your past teams?

Zeka: Because I was in the LPL until last year, I didn't really know or figure out what an experienced player can do to a team. But now that I joined DRX and I am playing with BeryL and Deft, they were teaching me so much stuff I didn't know about the game. I was able to gain so much game knowledge thanks to them. Outside of the game, they were helping us so much in terms of team bonding. They were giving us really nice conversation and advice. 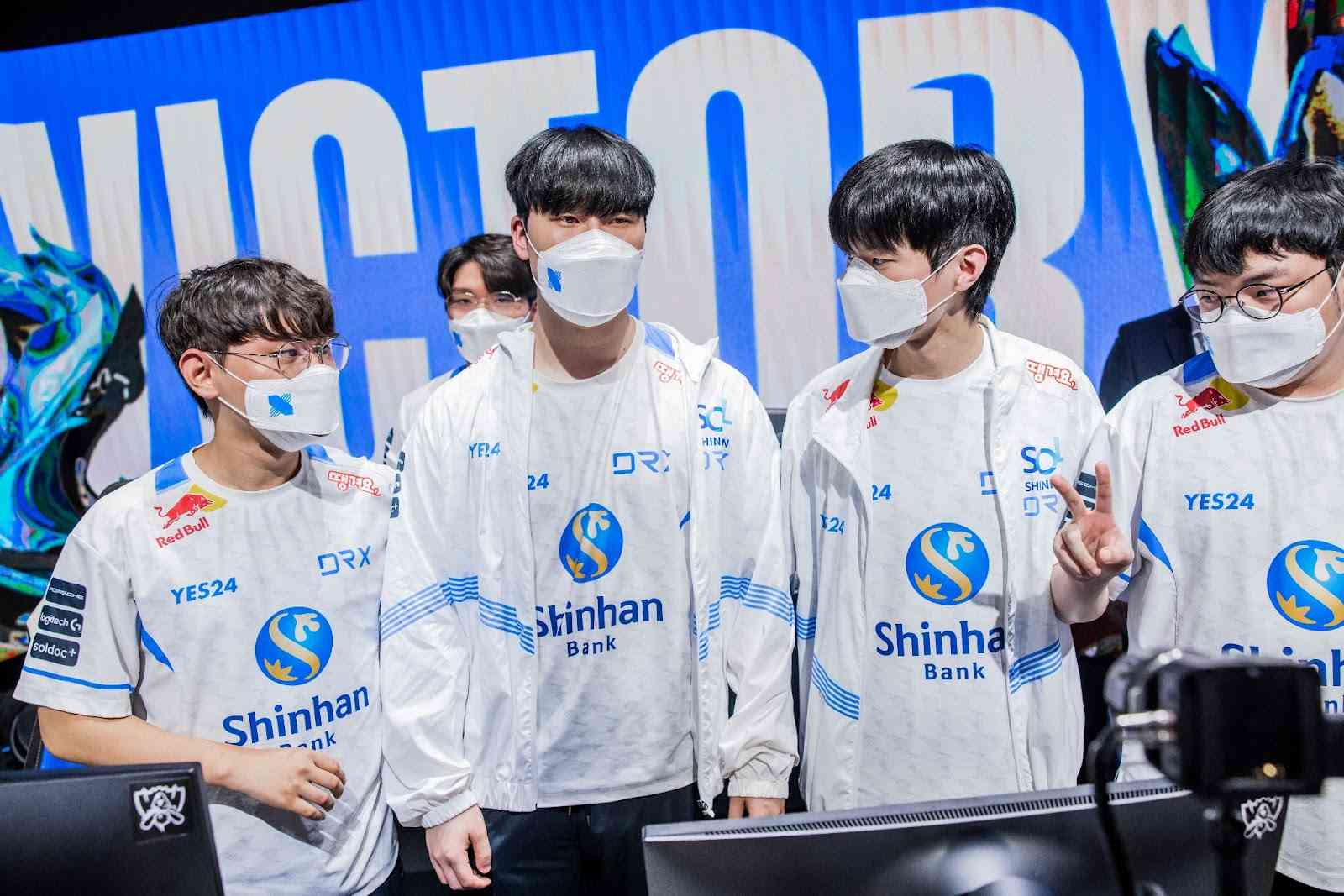 Zeka with the rest of DRX in the Worlds 2022 Play-In stage
(Credit: Colin Young-Wolff/Riot Games)

BLIX: Can you give an example of the team bonding with each other and what kind of exercise have you guys done within that regard?

Zeka: Game performance wise, they were teaching us a lot of macro plays because they have been so successful in the past few years. They were giving us a lot of tips and advice about macro plays and rotations. Outside of the game, whenever we were not in a good time, whenever we were struggling, they were able to help us cheer each other up and keep our mentality strong. Even whenever we hop onto the Rift, they always go, 'You guys are better than the opponents so let's just focus on our own performance and we'll be able to get the win.'

BLIX: Have you been able to play Champions Queue? And if so, what is something you feel should be included from there to the Korean server?

Zeka: I have played in the Champions Queue and I wish the Korean server could have a system where professionals or ex-pros can just exclusively play the game but it's a bummer we don't have it there.

BLIX: What would make you feel fully satisfied from your debut Worlds appearance?

Zeka: I can say that I have been performing pretty well in Play-Ins but I hope I can continue this form in the group stage, quarters, semis, and so on. I just don't want to leave any regrets behind after I finish my Worlds journey.