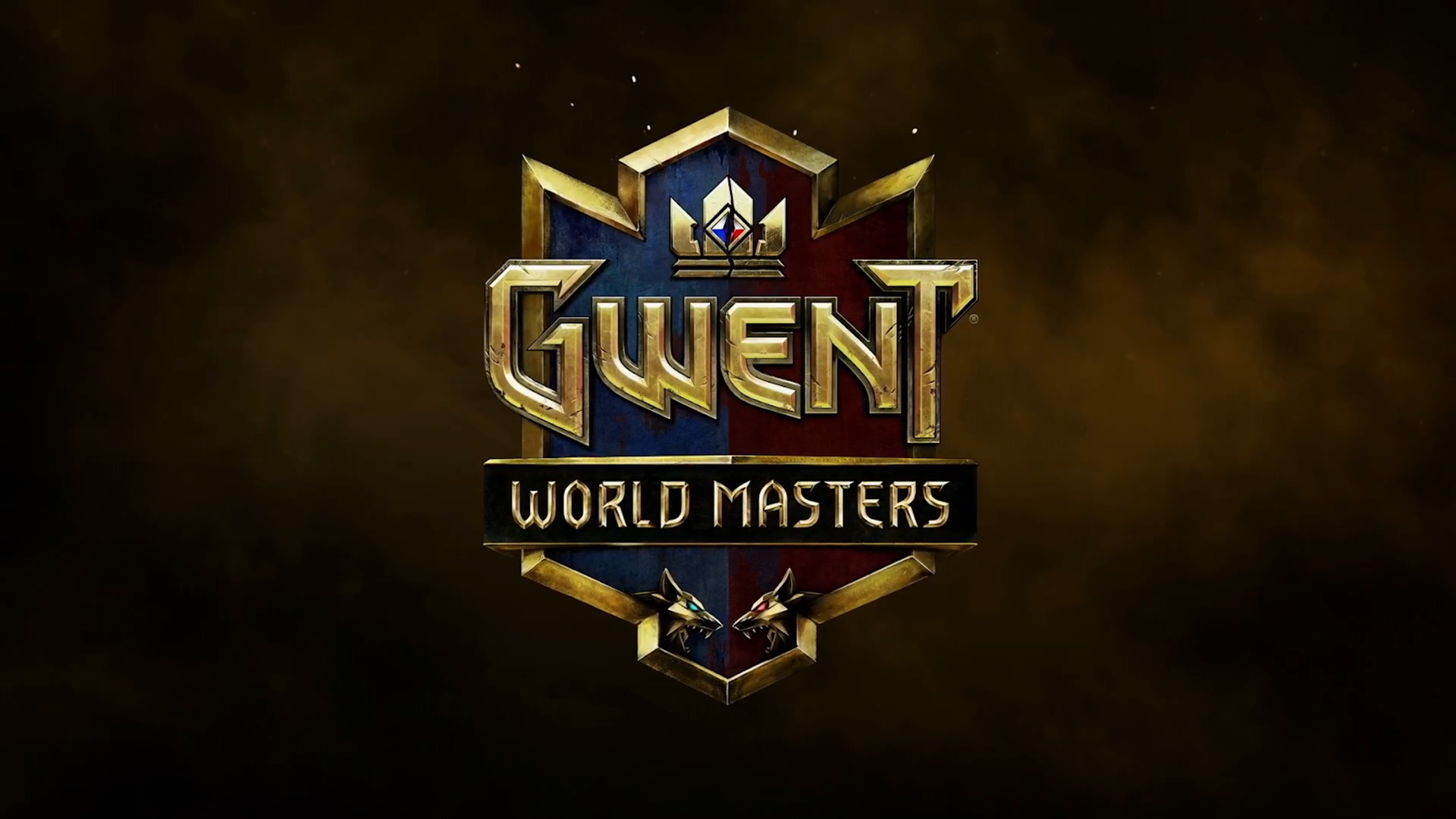 With Day 1 of Gwent World Masters concluded, we learned the names of the four best players who were going to battle it out for the victory. In the first semi final, we had Danirai, surprisingly the only remaining Pole, facing his tournament nemesis from Colombia - Poisound. The second bracket was set to be a battle between the Turkish Gwent superstar Kerpeten and Canadian underdog Spellingbee.

If you’re looking for a recap on how Day 1 unfolded and analysis of the decks each player brought, check: Gwent World Masters 2022 - Day 1 Recap

The quarter finals saw Danirai breeze past Truzky with a clean 3-0 sweep and he made it clear that he means business. However, things weren’t going to be easy for him. In the second quarter final, Poisound, the player who managed to beat Danirai in both the play-ins and qualifiers this year, triumphed over Gandalf0271 after a tight 3-2 battle. 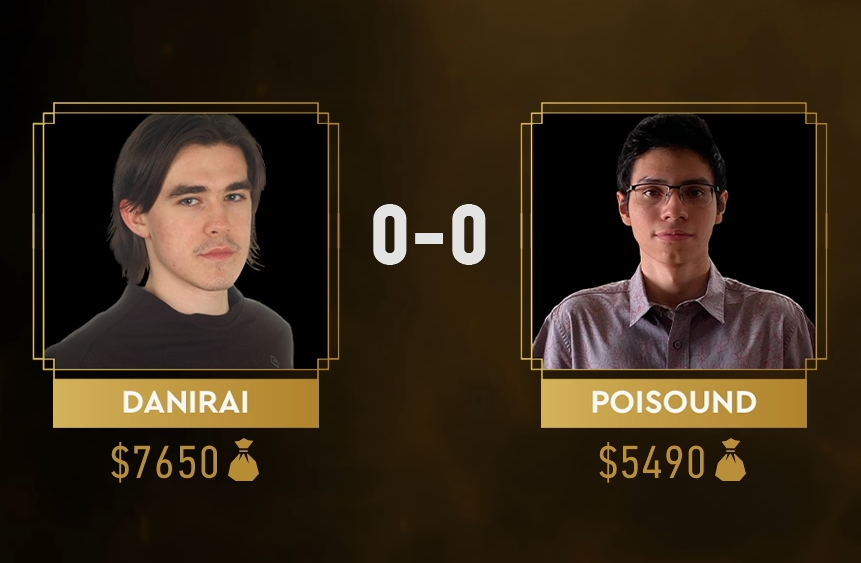 A headshot of Gwent Masters competitors Danirai and Poisound appear side by side with their total earnings ($7650 and $5490) beneath them.

Their battle started with Danirai on the blue coin with his Skellige list against Poisound’s Scoia’tael Deadeye Ambush. And while it was looking that Danirai might be taking the victory after getting into quite significant lead in the last round, Poisound closed the thirty point gap by taking advantage of an ideal setup for his Simlas who pulled out five Waylays followed by Isengrim boosting every elven unit on the board and finished up with a massive Vernossiel offensive finisher and took the win by fifteen points, a massive blow for Danirai.

Poisound further capitalized on the fact that Danirai seemed thrown off by his initial loss and won the second match after he brilliantly deduced that there are no unit cards remaining in Danirai’s round three hand and discarded his own cards to make it impossible for Danirai to get any points.

What happened next was something no one predicted. Danirai put on his winter cap as a lucky charm, turned on the music and instead of stressful calculating, he sat back, just singing along his favourite tracks, trying to get into the zone. Poisound also found his lucky hat, but it was no match for the winter cap. Danirai won the next two matches and while Poisound’s expression was growing increasingly nervous, Danirai’s laid back attitude was working wonders. At the end of the day, he secured the third victory and with it his spot in the finals. A spectacular comeback.

The second semi final was just as action packed as the first and produced a result that left many startled. The Divination challenge that had the viewers predicting match results spoke clearly — 87% of them were favoring Kerpeten. But it was Spellingbee who took the lead, got his Nilfgaard list through and then extended his lead after he beat Kerpeten in the Syndicate versus Syndicate face-off. With now only his Northern Realms deck remaining, he was in a very strong position and Kerpeten seemed just as surprised as the casters and Twitch chat. 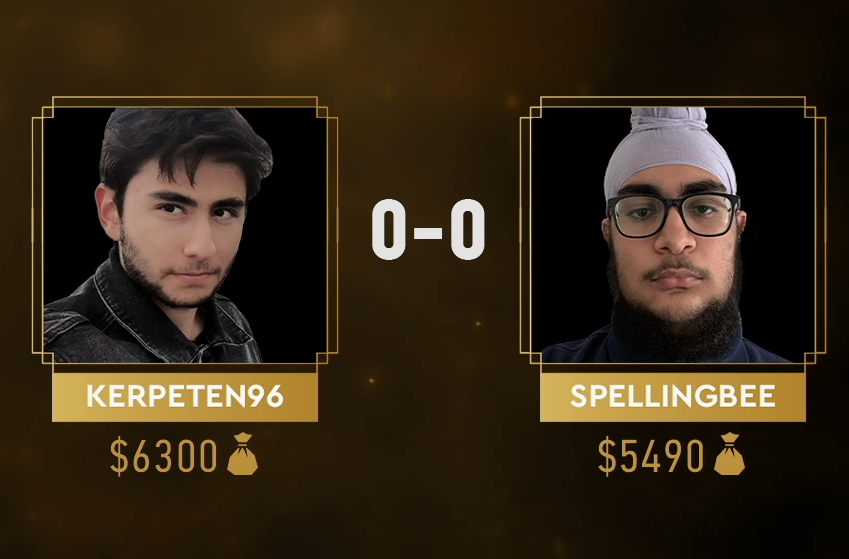 A headshot of Gwent Masters competitors Kerpeten96 and Spellingbee appear side by side with their total earnings ($6300 and $5490) beneath them.

The third game in the series had Bee starting on blue coin. Kerpeten opted for his Syndicate list and he was feeling the pressure - even the tiniest misplay could mean he’s out of the tournament — especially against an engine deck as strong as Knights. Not only that — most importantly, Spellingbee was playing immaculately. No mistakes, no hesitation and on top of that a fair share of luck when drawing his cards. It all came down to the last card. For a second it looked like it’s game over for Kerpeten when RNG gods denied him a second Poison card, but ultimately it proved to be just enough and he took the win only by a single point. But that didn’t weaken Spellingbee’s resolve. Against all odds, he won the next match after Kerpeten, aware of his inevitable defeat, forfeited in round three. Perhaps the biggest surprise of the tournament, Bee proved everyone wrong and unexpectedly secured his spot in the final.

The time had come - the final game of World Masters 2022 ahead, we were about to witness who will join Kolemoen, Pajabol and Cyberz in the elite World Masters club. The comeback kid Danirai versus Spellingbee, the underdog who surprised everyone. 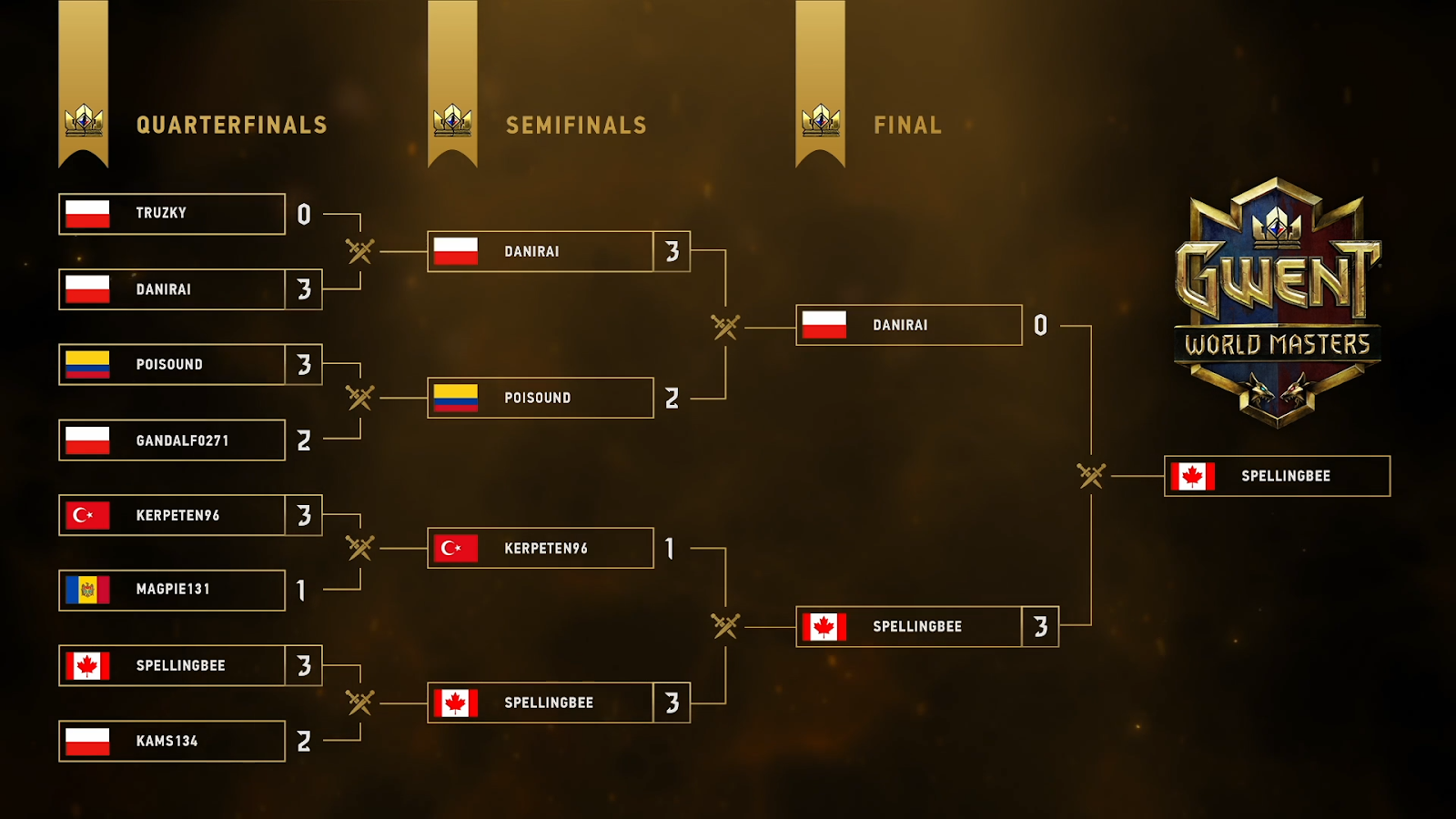 First match of the series opened with Danirai’s Skellige on blue coin. Bee decided to face him with his Northern Realms deck. A brave move, because Knights are at their best when going first. Playing the red coin makes it way harder to make your Aerondight grow which can be vital in a short round three. However, Bee being a specialist when it comes to fighting the odds, he once again surprised everyone and secured the win. And he didn’t stop there. He continued his winning streak in a Syndicate duel and then absolutely dominated the last game when Danirai simply couldn’t deal with Bee’s Succubi returning from the graveyard.

A confident showcase of skill, determination and calmness and a smooth and well-deserved 3-0 victory in the final for the Canadian who secured not only a spot among the best of the best in Gwent, but also a hefty share of the prize pool, $47,000 USD making their way to his account.