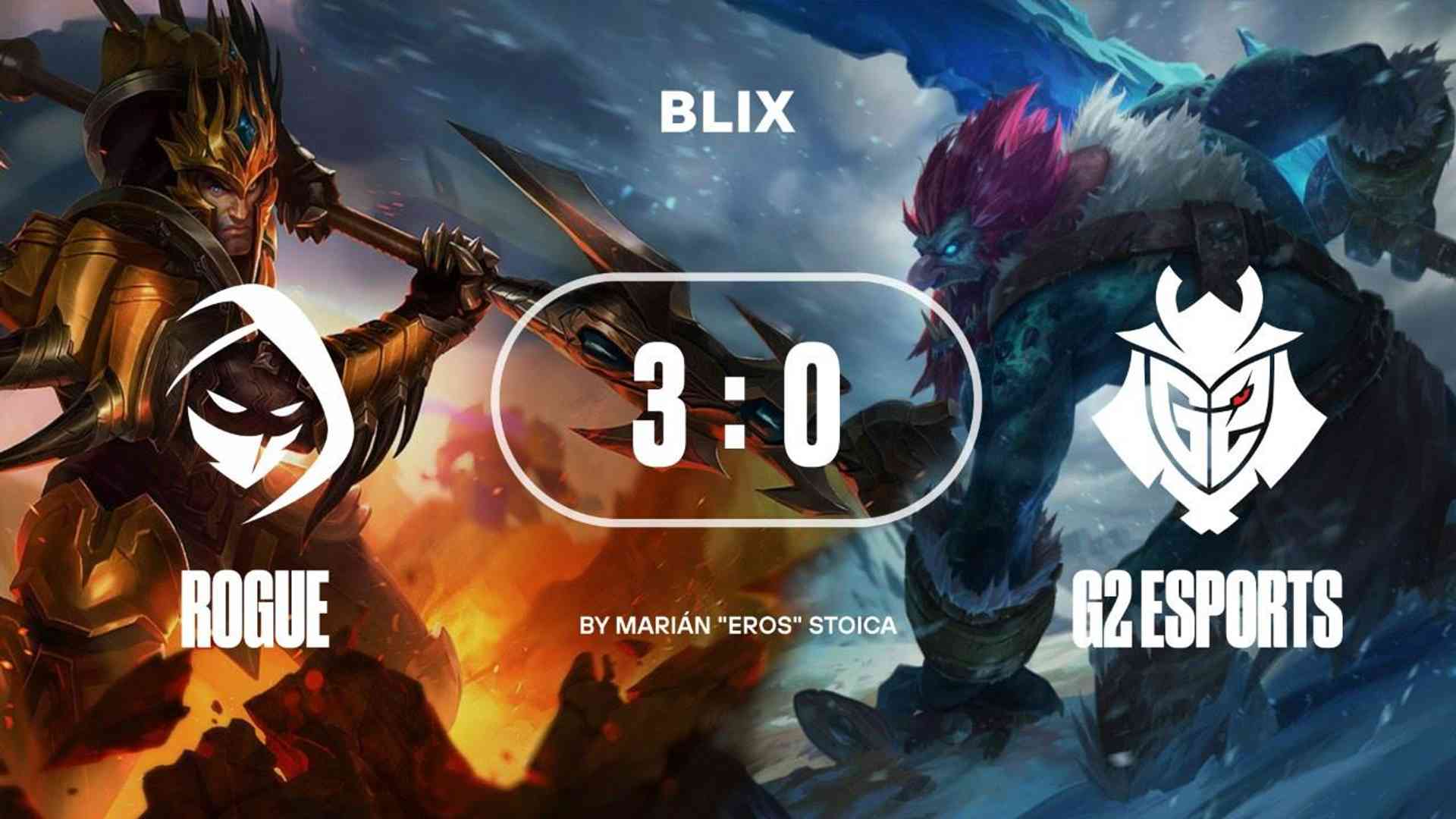 Yesterday we witnessed the final of the LEC and the crowning of Rogue as the new champion of Europe’s top league. Now, we bring you a chronicle, shedding some light and details in an attempt to to decipher how Rogue came out the superior team, taking G2 Esports for a ride over the three maps that lasted the final. And winning by a resounding 3-0.

The first map of the series started with two fairly standard compositions, we already saw Rogue give some priority to Soraka in the losers final; and with Lulu and Yuumi out of the equation the enchanter fit quite well within the composition.

G2 Esports had a pretty clear combo, Jarvan R + Ahri E + Draven R. Theoretically they could burstear any champion on the opponent's draft, then from there clean up the rest of the fight.

But Rogue quickly identified the fact that G2 wanted to play through their mid jungle — setting a very wide early line of sight around the bottom lane to protect the Soraka. And keep the Draven from getting out of control in the early phase. Plus Kim “Malrang” Geun-seong had a perfect read on Marcin “Jankos” Jankowski, who wasn't able to push his advantage in the early phase with Jarvan.

Rogue's game plan began to take hold when Andrei “Odoamne” Pascu and Malrang scored a kill on Sergen “BrokenBlade” Çelik's Gwen in top lane; stopping the abuse of the counter pick by the G2 Esports toplaner.

The game’s decider was the dragon fight, where Rogue’s execution was mechanically perfect. Getting an ace — with the advantage of Kalista and the Soraka in a very pleasant spot. Meaning Emil “Larssen” Larsson’s LeBlanc didn't have many problems closing the game with a pentakill of Markos “Comp” Stamkopoulos.

After G2’s performance in game one came off a bit cold, Ocelote's team proposed a change in approach — giving a scaling botlane and putting BrokenBlade on Aatrox.

Rogue on the other hand brought out the Caitlyn of Comp that we’d already seen in some of their other series. Then used their red side counter pick to try to deny Rasmus “caPs” Borregaard Winthe's Lyssandra through Tham Kench.

Both teams played a defensive early game always respecting the fog of war, which in this case was to the benefit of G2 Esports, having a composition that scaled better than the opponent.

Read more: Yasuo Support Got Played Professionally For The First Time Ever

As in the first game, G2 Esports faced a very poorly planned dragon fight, which put them behind in gold for most of the game, growing larger towards the late game.

This game had very close fights, even more so than game one, despite the difference in gold. Even with a 4 for 1 by G2 in the 35th minute — where they tried to end the game — Malrang still saved it by cleaning the middle wave with Jarvan, making time for his teammates to reappear.

In the end Rogue managed to get the Baron Nashor and the game was decided in a fight in the upper lane. Where neither Jankos nor caPs were very successful. Allowing Rogue to close the game once more.

The last map of the final was without a doubt the most decisive.

G2 put forward a draft focused on fighters and aiming for teamfights initiated by individuals against Rogue’s composition based on a front to back strat that made space for Sivir and Azir to output the DPS.

Even though Fiora outscales Aatrox and looked like she could be unstoppable on site, Rogue played the early game very well. With Malrang slowing down her scaling and her impact on the sidelane.

Malrang was without a doubt fortunate with his Jarvan’s engages in this game; which was ultimately decided in a teamfight in the central lane. Rogue killed 4 G2 players and from there the game became unplayable for Dylan Falco’s team.

Undoubtedly the series subverted everyone’s expectations. Even G2 seemed underprepared in this series against Rogue; playing very forced fights, arriving very out of tempo, and individually quite cold. Meanwhile Comp, Malrang and Adrian “Trymbi” Trybus were having the series of their life — sentencing with a 3-0 the first LEC of Rogue's set.