LOUD Sacy: “We know that there is a long gap between our team and other international teams, so we just needed to keep growing and we did it.”

Valorant has crowned its newest world champion after two weeks of intense competition and no, it's not from the usual regions like North America and EMEA. This time, as the final round in the grand finals of Champions 2022 ended, the world championship trophy was won by LOUD, who hails from Brazil, one of the biggest and best FPS-oriented regions in esports.

In their sixth series this year against North America's OpTic Gaming, the Brazilian team overcame their rivals through a pair of overtimes, a setback in the form of a 13-6 loss in Bind, and their past demons of struggling in international events to officially become Valorant’s second world champions.

LOUD’s victory was the completion of a long journey, kick started by the team's signing with the organization, one of Brazil and the world's fastest growing in the esports scene, propelled through their runner-up finish in Masters: Reykjavik, thrown into slight disarray with their 9-12th showing in Masters: Copenhagen, and culminated in the best way possible in Istanbul, with its players hoisting the trophy in front of a raucous crowd.

On top of being champions, LOUD became the first team outside of NA and EMEA to win a VCT international event, thus providing further credence to the potential other regions have in winning an event. But most crucially, LOUD's victory gave Brazil the validation it desperately needed of them being taken seriously as a major region in Valorant. From starting with disappointing results in the VCT to being home to the world's best team, Brazil can finally say —and with a few pounds on their chest while doing so — that they have arrived.

Speaking to the media in a post-match press conference, members of LOUD discussed their encounter with OpTic for the grand finals, the improvement they underwent throughout the year, what it means to be the champions, and more.

Pedro Romero, BLIX.GG:Congratulations on your amazing Champions run and victory. How would you summarize your experience here in Istanbul with the fans and being on stage?

Matias "saadhak" Delipetro: It's been an experience for sure. The Turkish finals are amazing. They're even more awesome after they started cheering for us. Thank you guys. This country in particular felt really welcoming for us because it somehow reminds us of Brazil. The people here is really welcoming.

BLIX: Brazil has become the only region to win a CSGO Major, a Rainbow Six Invitational, and a Valorant Champions. How do you feel about this and do you think Brazil is the home country for FPS games?

Matheus "bZkA" Tarasconi: I was able to play Counter Strike professionally before I went to Valorant. I played Paladins as well in addition to saadhak and Sacy played League of Legends, so we have players from nearly every different game here. I just feel that we love FPS games. When we started playing in LAN houses as kids, it was only FPS, so in our country, everyone loves this kind of game. That's why we have so many people and we have someone who actually gave us the inspiration to do well.

We have successful cases in other games and that helps in our growth in other games like Valorant. For example, we see a lot for FalleN. We seek a lot from his teachings in other FPS games, but the fundamentals and the way that he works is something that inspires a lot in our work philosophy as well.

BLIX: Sacy and saadhak, you guys were crying and tearing up right after the win. As two veterans of not only this roster but also in esports, how did it feel to finally get a big trophy after all this time?

Gustavo "Sacy" Rossi: I mean, it was the plan. [saadhak: It was the plan all along. We won a trophy! Yes!] Right after our loss in Berlin during the last Champions, we were like, 'Okay. We know how to play the game now.' [laughs] We just needed to have the right players with us and refine our discipline. We know that there is [a] long gap between our team and other international teams, so we just needed to keep growing and we did it.

saadhak: Personally, it was so tiring. We were training over and over again. We almost made it back in Iceland and it was really good in the sense that we demonstrated that we have the level to compete on the international level, but somehow we were lacking something. Then we had to play in Denmark where we bombed really bad. After that, we improved a lot on our mental side. It was a lot of effort and that's maybe why we teared up a little bit.

BLIX: Breeze was a very intense map during the series. It may very well have been one of the most intense moments in the whole tournament. Tell us about this back and forth foray and how did you end up winning Breeze?

bZkA: We stepped up individually because the two games on Breeze were very similar in the way they like to play, which, in turn, was similar to our own playstyle. It was very hard for us to do the readings and be one step ahead of them. It was where we were able to actually get a win individually speaking as people like aspas stepped up to end the game and that helped us a lot. And also in the end, when I had no more pauses during the overtime, I was just praying so it helped us a little bit more.

BLIX: Was there any team that always managed to amaze you with their gameplay in the tournament? 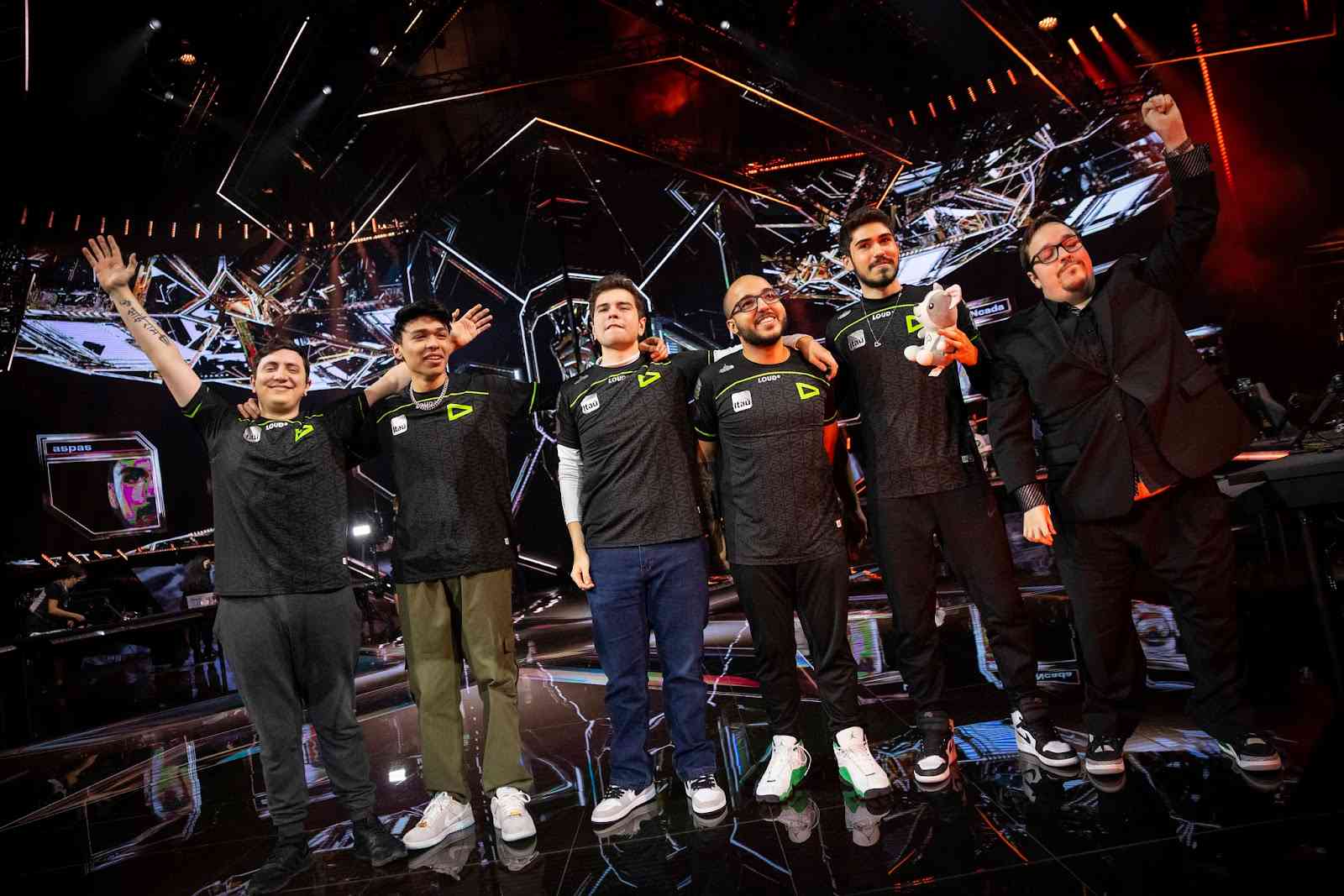 BLIX: Sacy, this marks the sixth international Valorant event and each one has had a different team as the champion including you guys. What do you think that says about the Valorant esports scene for now and the future?

Sacy: Valorant is not consistent about the teams winning. The game is adapting so the teams are still trying to get how the game is working. I came from League of Legends so I know how to adapt to a game that changes every two weeks. But yeah, they are getting used to it. Next year, we are going to see a team that will win two international events and I hope it's us.

BLIX: bZkA, about facing OpTic once again, albeit this time having more stakes at hand, what did you see that was different about this match compared to past matches?

bZkA: Every game against OpTic is very hard mainly because we can do a lot of work behind the scenes about how they're going to play the map and how they're going to approach it, and when we get in the game, they can just surprise us by changing a lot. They are [a] team that can adapt very well to every situation. It's hard because the game plan we did, for example, on the upper finals, we were able to read them very well and be ready for anything [that] was going to happen. However, they surprised us a lot so we had to keep adapting on the fly during that series.

I think that everyone [on] the team, even the most inexperienced players like less and aspas, did a really good job on participating and communicating and trying their best with the changes we had to do during the game. Additionally, pANcada was a very fundamental piece in that as well. They're very hard to beat.

BLIX: saadhak, on top of LOUD's victory, you're making history as the first Latin VCT champion through your representation of both LATAM and Brazil. How do you feel about vanquishing your archrival for this year?

saadhak: It felt like we really learned a ton each time we faced them and we demonstrated that, after tons of work and dedication, we managed to improve as a team, stand our ground, and win the finals. It's incredible and I feel very blessed.

BLIX: bZkA, across all of Champions, what match did you learn the most from and what did you personally learn from this experience?

bZkA: I feel the match we learned the most was the first series in the playoffs against Leviatan. That was because we were in a 12-6 situation and we managed to come back from that deficit. We just played our game, focused on ourselves in communication, and became resilient during the match. That made us stronger in the whole tournament in [sic] both sides. One side is such that there is no loss in a match.

If we have a round, we just need to play it the best way we can do, and just focus one round at a time. At the same time, if you're the team that is playing against us, it's going to be hard for you because you can win 10 rounds in a row but you know that the game's not over. I think that's the game that showed us our ability to be more resistant during the competition.