ropz: "I do feel a bit robbed because, from my POV, that is the play of my career..."

Hugo “TheSwedishJoker” Nilsson Meier, BLIX.GG: There were a lot of uncertainties for you guys before the event started. What has the preparation been like?

Robin “ropz” Kool: The preparation is basically nonexistent. We practiced before the tournament with rain, but we knew he was not going to be here. But the main point is you want to practice with rain. He's going to come back and step in for Katowice. So, Katowice is the main goal which is why we want to be ready for that and for this tournament. We knew we were going to use k0nfig but then things happened and we had some preparation with k0nfig. Then we had some preparation once after k0nfig had to leave and then es3tag stepped in. So, we had a few hours, a few maps to practice through and that's basically it, I think. Not even maybe 5 hours of being together and that's basically our preparation with es3tag

BLIX: Speaking of Katowice, I remember you guys saying that you were playing a lot of retakes last year with JKS. Have you done the same thing with es3tag as back then?

ropz: In all honesty, I think with es3tag we are doing a similar process as we did in Katowice last year. Yeah, with Jks we played a lot of retakes, just chilling, vibing in the practice room, trying to get to know each other and get the composition together as soon as possible and be ready for the match. And it's the same story here, we're just playing some retakes, playing a lot of deathmatch together in servers, just kind of having fun and getting to know each other. We just eliminate the need to have to understand how people communicate and move around the map and all that sort of stuff. Just very basic stuff. We're trying to get nailed down and that's basically it.

BLIX: You touched a little bit on the topic of k0nfig. Can you talk to me a little bit about the whole situation with him and es3tag and how it has been from your point of view?

ropz: Well for us it has been quite frustrating. I think the whole story is now public on the internet anyway, so we knew we were going to use k0nfig. BLAST said yes initially during the media day, which is before the match, we got a no, and then we were in, like, an emergency where we had to, like, find another sub for our sub, so that was quite a pain. And we had some names running through the list and es3tag lives just nearby and he's an extremely well-rounded player. He reminds me a bit of myself so I think he was the easiest and the best pick to go for. That's basically it.

BLIX: Have you guys changed your play around es3tag with him coming into the team?

ropz: So, for our games, we're basically just slotting es3tag into rain's positions and he's trying to do his best. He's obviously not playing some of the positions, but I think with the help of karrigan and us three; me, broky, and twistzz, we can make sure he's as comfortable as possible. And we're never really like saying you have to play like rain. He's just going to go in there to do what he wants to do. There's no rules or anything. If you go for a peek, it's okay and we understand. That's like the soul of FaZe anyways. We take duels as much as we can and it's pretty easy to sub for FaZe in that way, but I'm pretty proud of that. It's just taking rain's roles and he's doing pretty well. 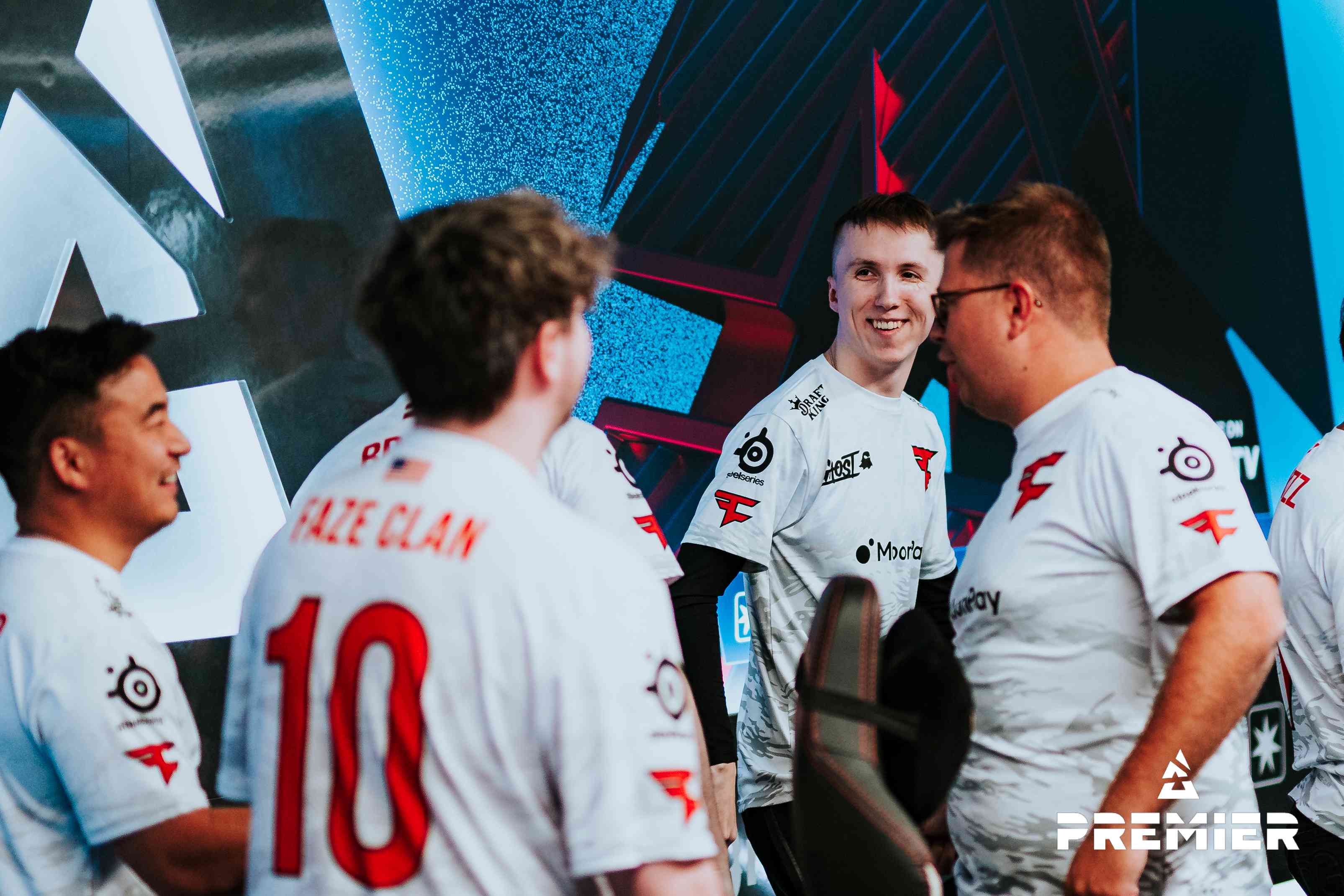 BLIX: You were nominated for “Highlight of the year” at the HLTV Awards and m0nesy ended up winning. Then you tweeted out hinting that you felt robbed. Do you really feel robbed that you didn't win that category?

ropz: Very deep down I do feel a bit robbed because, from my POV, that is the play of my career from the last almost six years I've played pro CS. That's the best, hands down the best play I've made, considering the situation and the scenario. We have talked so much that you have to take this into consideration, but we might have not won any tournaments if I didn't make that play because that's the first map in the grand final. The best shot we had in the grand final was winning the first three maps. Because the next map, I think the fourth map was Ancient, and with JKS we had like zero preparation in that one.

So, yeah, me winning that clutch or the 2v5 in that scenario basically enables us to win inferno, right? And then we go and win the next two maps. And I think it's tough to say if the context should matter in terms of highlights, but I think there's no escaping the context because if you make random five bullets headshots in a matchmaking game, you know, why not take that? So you have to consider the context and I just feel sad because that was the best play I've made in my last six years, almost.

On the latest update and Anubis

BLIX: I want to talk to you a little bit about the update before I let you go. Have you been able to get some sort of opinion on it now after practicing and playing on it?

ropz: Anubis, it's very unique. There's like the whole boat and water area, which has never kind of been in any of the CS maps so far. It's tough to say. I want to be critical and give some directions to go for the maps and what to update. It definitely needs updates, for example, with Anubis and there's a lot to work on because the map feels pretty rough still. Some areas of the map are, like, you can just walk into it. You can contact. And some areas of the map, like, you can't even go in with nades and stuff. It's extremely unbalanced, I would say as of now in terms of not like the CT and T side, but just the angles and stuff, I feel like are unbalanced.

And regarding ancient, I think it's still the same opinion. Also, the map is just getting updates. I like ancient. I think Anubis is fine, but I think the direction in which the map pool is going is kind of bad. I saw an interview from NiKo and he said the map pool has never been in a worse place. I tend to agree with him because it's really weird. I think Vertigo is definitely one of the worst maps to ever be in the map pool. It's quite frankly also the reason why it's being played. Even though if we don't, some play you are going to face. But I used to do it back in mousesports. I just hate the map. I think the layout is just not for pro cs and I just hope to see some old-school maps back. It's been a long time since they slotted in an old-school map.

BLIX: Would you like to see them bring back like a Cache, Tuscan, or Cobble that is, on the bench right now, reworked instead of bringing in new maps as they've done recently?

ropz: Honestly, I would love a reworked Dust 2, Cache, or Tuscan. Those are like three, I think, perfect options for Valve to slot in. Because I think what we're missing right now is just a bit of simplicity. Like some of the maps, Anubis and ancient even. They are a bit more complicated in terms of the layout and the angles and everything. So, I think if you just slot in a map like Cache, which is so black and white, you just have a and b and you have one whole level. You don't have multiple levels yet. I think that would be kind of a refreshener or a refresher. Even though it's so simple, people are so innovative nowadays that you'll see new stuff for years to come.

BLIX: Have you been able to see anything that you would like to see changed?

ropz: One part of the map for sure would be A site on Anubis. So, I feel like as a CT, it's extremely rough to play A. There's like nowhere to stand if the T's execute properly. You have so many flashes and molotovs flying in. You can take the whole A site with grenades and leave the CTs nowhere to be. And I think that's a slight problem. But there are some ways to counter it, I think, which have not been seen yet. But I think A site might have some reworks in the future, but we'll see.

BLIX: Does it have the potential to be a good map for riflers like yourself?

ropz: I think Anubis is pretty balanced in terms of rifling and awping. I think good angles for rifles and good angles for AWPs, but some of the angles are just so unorthodox that you have a complete advantage on one angle and then you have zero advantage on some of the others. So it should be a bit more balanced in terms of everyone can win like a duel on every single angle.

BLIX: Speaking of rifles, they also changed the silencer’s fire rate. Do you feel like that was the right update?

ropz: It was definitely the right update to do to balance the M4s and reduce the fire rate and the damage. But I think eventually, in a year or in five years, they should just make the M4's so that you can choose in the freeze time. You don't have to pick one. I think making you a choice is going to be extremely unpredictable in some scenarios. You want to play some different M4, and it gives more depth to the CT side, definitely, because you have certain plays around one M4 or the other. So I think yeah, I mean, I like the change with the silencer, but I would like eventually to see that you can choose both.

BLIX: My very last question is about the new ranking that Valve came up with. Considering everything that happened to you guys at the Rio major, do you think that this was the time to make that change? Or do you think that they maybe should have waited out the Paris major to see if it happened again?