The Intangibles and Successes of NA’s Best Leaders 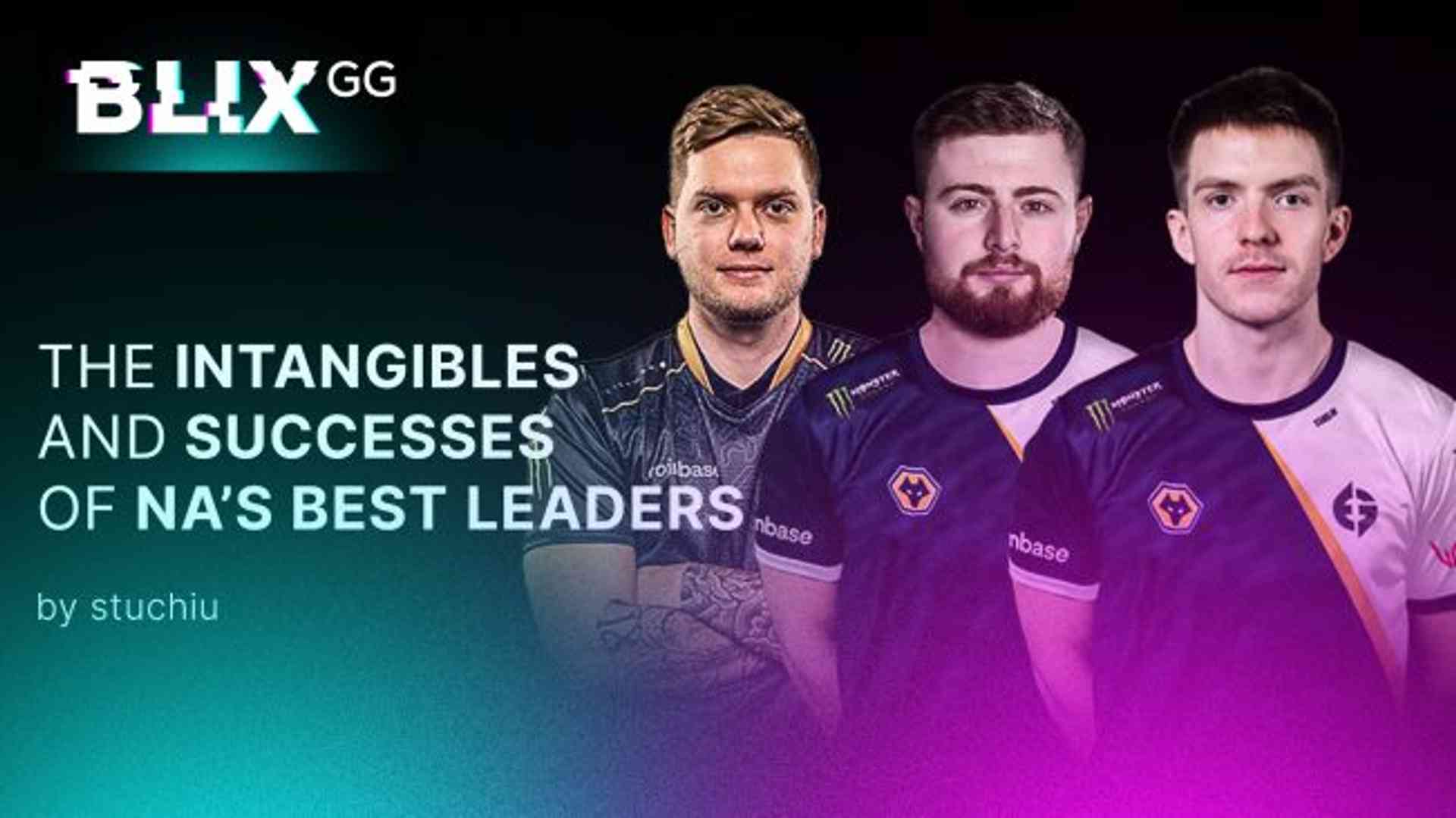 Every great roster starts with two core ingredients: the superstar and the leader. The superstar is obvious; you need only watch their game and look at the stats to understand their impact on the game. The leader's impact can't be as easily quantified. The stats can point to a leader's individual skill, but not how they impact a team through tactics, decisiveness, leadership, or any other intangible. To get a better grasp, we will take a historical overview of NA's leaders, what intangibles they gave to their team, and how that led them to their success.

Context on the “Best”

Before going into the list, I’ll first lay out what I mean by the best NA leaders. For the purposes of this article, the criteria I used are as follows. Players who primarily led and played in the NA region. Have had deep international success (reaching a top 10 level in the world for a protracted period of time). And have had success with various line-ups/cores.

Nitr0's leading career started in 2017 when he swapped roles with Stanislaw and took over the igl role. After the switch, Liquid got to the finals of both ESG Tour Mykonos and ESL New York 2017. It wasn't until As a leader; that he had the most success of any NA leader. The initial lineup with Stanislaw and later Lucas “steel” Lopes were successful on an international scale. After Epitactio “TACO” de Melo joined the team, Liquid evolved into the second-best team in the world but had the misfortune of running into the GOAT Astralis lineup. After that, Stewie2K joined the team and did a speed-run of the ESL Grand Slam. It was only after hitting the online period that Liquid hit their slump. Nitr0 retired to Valorant and made a return to Liquid, where they are slowly making a comeback to the top.

What's interesting about the TACO and Stewie2k lineups is that there is only one player switch, but stylistically they were fairly different from each other. The TACO lineup was a lot more structured and tactical compared to the looser and more aggressive Stewie2k lineup. This speaks well of nitr0 as a leader as it proves he can lead both styles. While that's good, the most impressive thing about nitr0's tenure as a leader during this time period was the team unity. There were multiple times when the team could have broken apart, whether through internal or in-game issues, but it never reached that point (in contrast to, say, Stanislaw's OpTic).

This is even more telling after nitr0 retired. Twistzz felt isolated on the team after nitr0's retirement, and this eventually led to Twistzz moving over to FaZe. While I've sung nitr0's praises, it's hard to parse how much credit belongs to him and how much to Wilton “zews” Prado. Zews could very well be the best coach in CS:GO, especially when it comes to man-management. While we can't know how much impact he had in the first Liquid rosters or how much the 2019 Liquid roster needed it (you don't need a lot of team unity skills to keep things together when you're winning everything), but nitr0's recent return certainly shows signs that he can do it.

The current Liquid roster has Jonathan "EliGE" Jablonowski, Keith "NAF" Markovic, Richard “shox” Papillon, and Joshua “oSee” Ohm. While they aren't a title contender yet, the team is already trending upwards, which is a good improvement considering nitr0 has recently returned from retirement.

Overall, Nitr0 has shown he's probably the best at playing with high firepower and keeping the team together.

Stewie2K hit the scene like a wrecking ball straight through the smoke. After only joining Cloud9 for a few months, he quickly became Cloud9's totemic player. He was their entry, star player, and leader. His style of play was aggressive, frenetic, and fearless style. He's led a few different Cloud9 lineups to high success (especially considering the relative skill of some of their players) and, most recently, a Liquid lineup (which was ultimately a failure).

I'd never put any of the Stewie2k line-ups in a top 10 list of most tactical teams to ever play, but there was always a clear intent and idea to the strategies and tactics they did run. What makes Stewie2k stand out as a leader is his hunger to win and the decisiveness to act on that hunger. That hunger, explosiveness and fearless is charismatic and why he's drawn such an avid following around him. You can't help but stand up and applaud when Stewie2K calls for and pulls off one of his aggressive tactics.

As a leader, Stewie2k seems to fit best with players who can see his vision. That's why the Stewie2k and Timothy “autimatic” Ta duo is one of the best duos in NA CS:GO history. However, his last stint on Liquid showed that he wasn't able to coalesce the different players into a greater whole. Liquid had a lineup that should have been able to contend for titles consistently, and they failed that mark.

That isn't necessarily a knock against Stewie2k as nitr0 wasn't able to make Liquid work during the online period either. Still, it's something worth considering, especially as Evil Geniuses continue to struggle getting off the ground despite also having potentially great players on the roster too.

The criticism is too harsh as it takes most leaders months to make a line-up work and potentially longer if it's a new type of line-up they've never worked with before. In addition to that, autimatic just returned from retirement, and William “RUSH” Wierzba from a period of inactivity. EG's failure at the American RMR is certainly bad, but we can still give Stewie2k some leeway to prove that he can lead the new EG line-up. For now, it's fair to say that Stewie2k works best as a leader if he can use his idiosyncratic brand of CS.

Seangares is a much older name compared to nitr0 or Stewie2k. Even so, Seangare earned his spot in CS:GO history. In raw results, he's had the lowest amount of high placings in tournaments. Conversely, on a pure tactical quality assessment test, no other NA leader has ever tactically accomplished as much as he did in the summer of 2015. The lineup had: seangares, Jordan “n0thing” Gilbert, Michael “shroud" Grzesiek, Tyler “Skadoodle” Latham, and Ryan “freakazoid” Abadir.

There was some excellent firepower on the team (notably Skadoodle and n0thing), but the real engine of Cloud9's success was their tactics or strategy. Or perhaps their anti-strategy. Joshua “steel” Nissan once nicknamed that particular lineup “Counter-Strat 9,” and it was the perfect moniker for that particular squad. They had an answer for everything, and the reason was because seangares often had the answers before the match started. With meticulous planning, Cloud9 shocked the world.

Outside of Cloud9, seangares's earlier compLexity lineup and later Misfits lineup are both strong performers. Misfits got a lot more mileage out of the little firepower they had, and compLexity may have inadvertently changed Major history by upsetting VeryGames in the Group stage games with an epic victory on Inferno.

Overall, I think seangares takes the cake for the raw Xs and Os among the leaders, at least relative to his time period.

Daps is a great builder of NA CS:GO lineups. He helped make the first Liquid line-up, then OpTic, and then NRG. He then made a line-up for Gen.G, which was middling before the project ended.

Among his various lineups, his two best were the OpTic and NRG lineups. Daps evolved tactically as a leader over time. He started as a reasonably structured, systematic type of leader and over the years, he started to incorporate different styles of play. By the end of his time on NRG, he ran a structured style that allowed his star players to have freedom and independent action.

Among all the NA leaders, daps is by far the best at scouting and cultivating talent. He found players like NAF, Oscar “mixwell” Canellas, Vincent “Brehze” Cayonte, and Tsvetelin “CeRq” Dimitrov. Brehze and CeRq attest to daps' ability to raise players as both players reached super-status under his tenure at NRG (though they both hit a higher peak after Stanislaw took over as igl). In addition, Kenneth “koosta” Suen hit his peak as a player under daps' Gen.G squad.

There was always some barrier between daps and taking a team to the highest peak. This was most notable with the NRG lineup. They had the firepower and team play to be championship contenders. Overall, daps is certainly among the best tacticians in NA CS history and by far the best when it comes to scouting and building up line-ups.

The final leader on the list is Stanislaw, and fittingly enough, he comes after daps. Stanislaw's best rosters were lineups he adopted from daps, most notably OpTic and NRG, which later became EG. Both rosters had a certain similarity in their style of play. Both squads had high firepower, a loose aggressive, and ridiculous entry strength.

Tactically Stanislaw squads could never wow you with how intricate he set up the round or controlled a half, but he was fantastic at making split-second mid-round calls that could completely catch the other team off guard. At Stanislaw's absolute best, his style combined with ridiculously high firepower created matches where EG could have complete tempo control (most notably against Astralis).

Stanislaw's teams had some of the highest peaks we've seen of any NA CS squad, but that greatness also highlights a lot of his flaws. Stanislaw, for whatever reason, could never keep a team consistently great for long periods of time. The most consistent team he had was the EG squad which he inherited from daps. That squad hit a slump going into the online era and then completely revived after Zews joined the team, so it's hard for me to credit Stanislaw as I haven't seen him do something akin to that with another line-up.

Overall, Stanislaw was one of the best leaders at taking an established line-up and pushing it to the next level for a few months. His style created some spectacular highs and resulted in lower staying power.

It is hard to get a grasp of what intangibles a leader brings to the table. Hopefully, this overview gives some insight into how a leader can impact the game outside of the scoreboard, especially as these five leaders have five disparate specialties.

Nitr0 has had the most success at managing star players, whether in a tactical or loose system. Stewie2k's best successes as a leader were during periods when his team matched his style of CS. Seangares was a tactical mastermind and could probably make the most use of prep time among all the leaders here. Daps is brilliant at scouting and creating teams. Stanislaw could supercharge lineups and elevate a team for a period of time.

This all begs the question of which leader is the best? In the end, it comes down to the circumstance of the team. Except for the GOAT leaders (i.e., Finn “karrigan” Andersen or Lukas “gla1ve” Rossander) who have shown they can work with almost anything from anywhere (karrigan more so than gla1ve), each leader has some particular intangible that makes them uniquely great for certain types of players or teams. That's what makes CS a brilliant game; there are many answers as to how to make five act as one, and it all changes depending on the five.