Valve planned to add her to the game about two years ago.

Announcing new heroes during The International is a common thing for Valve. This has been the case with almost all characters since the launch of the legendary MOBA sequel. And this year is no exception: Muerta, the Mexican woman of death, is officially introduced in an incredibly stylish video. We expect her to appear in the game at the beginning of 2023.

Also, as is often the case with Gabe Newell's gang, all we got was a short video that, apart from design, does not really tell what kind of hero she is. Yes, but Valve would not be Valve if they had not left links and tips throughout the game for several years.

How is Revenant's Brooch connected to it? What does the recent Phantom Assassin persona tell us? Finally, which skills might Muerta have? Let's dive in!

She's The Revenant And Has A Brooch

The first serious call about Muerta appeared on 7.31. When the Primal Beast broke into our pubs, destroying everything with imbalanced power, game devs also added three new items: Wraith Pact, which got under our skins during TI 2022; the rare but valuable Boots of Bearing; and, finally, Revenant’s Brooch. It's not a very popular item due to the high price, but it's pretty strong in the deep late game if you have an INT carry like Lina, Dark Willow, Silencer, or OD.

In update 7.31, released on February 24, Valve describes the new item:

Rumors of the Revenant's Brooch have persisted for centuries, and in some cultures, the legends of its cursed owner are celebrated still — though few believe such mythical origin stories are actually true.

In some cultures? This is an explicit reference to real life as well. As some might have guessed, we are talking about Santa Muerte, a modern cult of Death, imagined with the Lady of Holy Death. It is common in Latin America and the southern United States. Its followers consider Death a kind and generous deity who can grant any wish. The Lady of Holy Death is depicted as a skeleton or woman with a skull instead of a head. 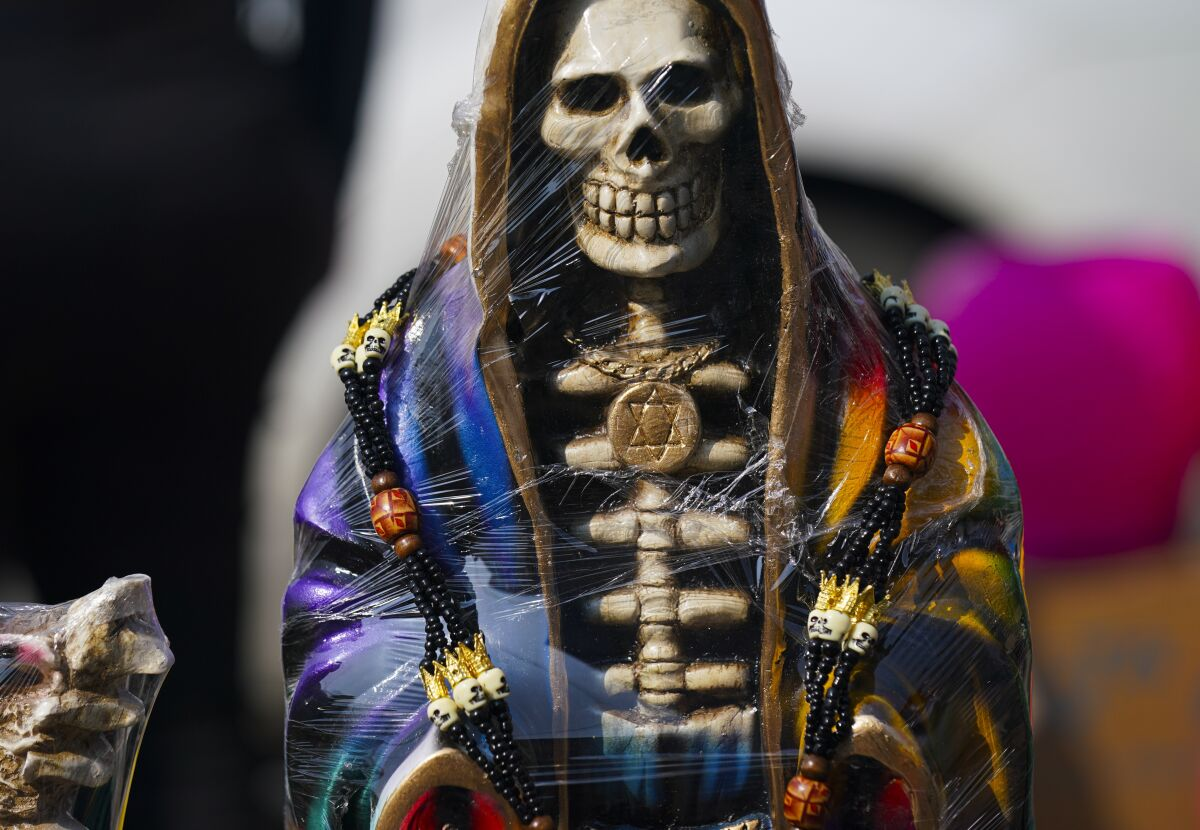 People celebrate the Day of the Dead on November 1-2. According to the legend, the souls of passed relatives visit their homes these days. The living world merges with the world of the dead. On the Day of the Dead, cemeteries are decorated with ribbons and flowers, and the roads are adorned with candles so that dead relatives can find their way home.

By the way, this is how Revenant's Brooch is described in the game:

The cursed brooch of a fallen guardian who stalks forever between the veil of life and death.

We see candles in the trailer, as well as numerous flowers. And the Brooch sits on the character's neck: a metal base, feathers along the contour, and the colors, as well as inscriptions. 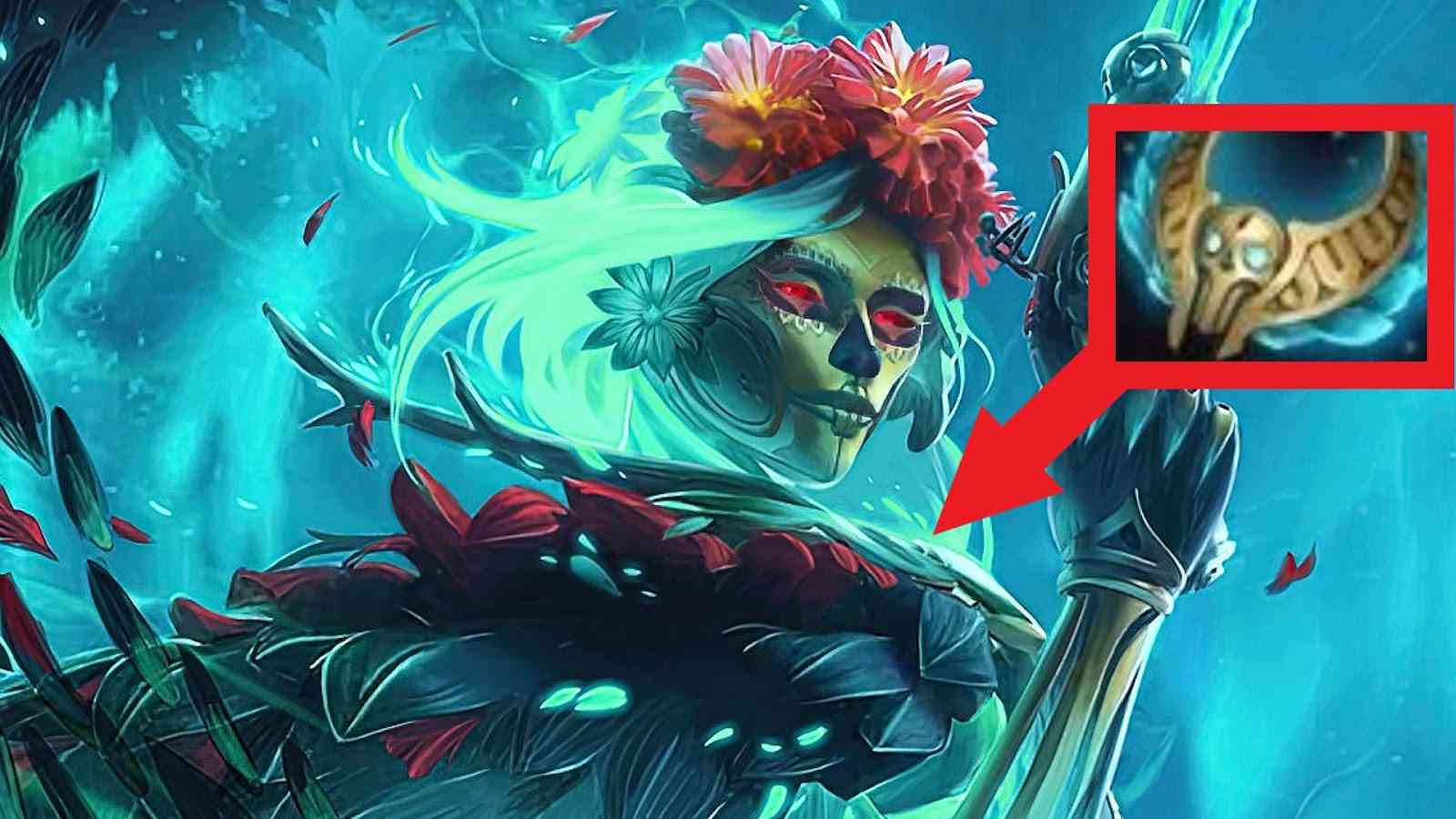 Asan, the recent Phantom Assassin Persona, is the most bonded to Muerta person in the game. Right now, he has unaddressed lines that go like this:

These are the lines he says when he buys Revenant's Brooch:

However, his line "I had no parents. Only teachers." also hints that the image of the mother, in this case, is figurative, not literal. Indeed: Veiled Order seeks orphans only, but Muerta, for some reason, adored the boy and raised him as her own. Here are Asan's monologues regarding the Order and Muerta:

I had no parents. Only teachers. Disgraced sisters of the Veiled Order... Who plucked me from the viper's nest. For I alone was born to stand against those who scheme to alter fate. I was not a child to them.

I was raised by fallen angels -- the outcasts of the Order. But it was not they alone who saved me. There was another. A ghostly figure. Inspiring equal parts love and fear. She guided the hands of my saviors. And still appears to me, in times of dire need... 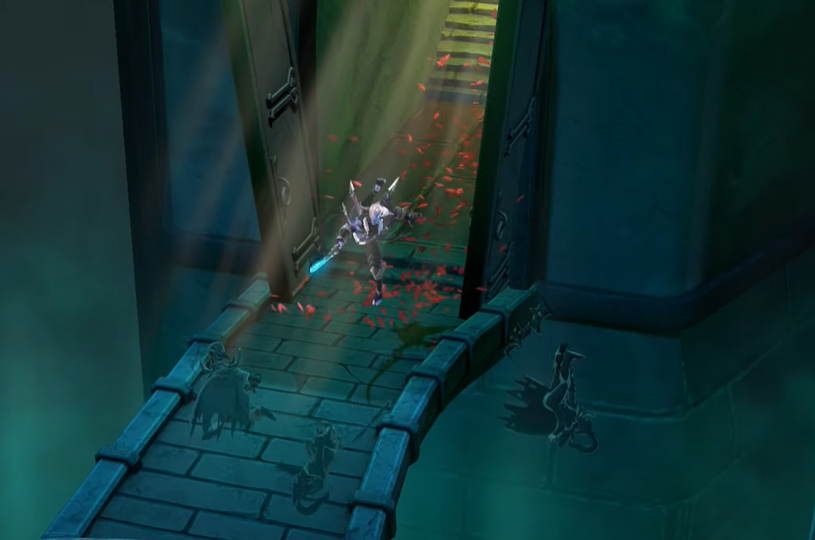 In Asan's first appearance in the game, these red leaves might be marigolds, the traditional flower of the Day of the Dead. In addition, TI2022's stream showed a slightly different Muerta's trailer: it had the same red leaves flying at the end, while the YouTube version does not have them.

What a very poetic story.

Valve prepared Muerta a long time ago. And even though the first severe hints were added recently, some Dota 2 heroes have long had unused phrases that are most likely intended for Muerta.

Also, even though Muerta holds one pistol in her hand, she will shoot from two. The screenshot below clearly shows the second pistol on the left side of the belt.

A long time ago, data miners scratched out a lot of information about unreleased heroes from the leaked Dota code. You know, the Valkyrie, Squirrel, and Primal Beast stuff.

Today, we know the first two as Dawnbreaker and Hoodwink.

This data also has lines NPC_DOTA_HERO_CORPSE_MOTHER and NPC_DOTA_HERO_GUNSLINGER. And although in the case of Hoodwink, the abilities of Squirrel and Mouse were combined to form an entirely new hero, this is unlikely to happen here because Gunslinger is an STR hero. But Corpse Mother has such skills:

1. Grave Grapple. It will most likely allow us to move quickly to the enemy hero or the trees/obstacles. Grappling hook that is. Decent!

2. Life Link. Shapeshifting into the world of the dead? Or heal for allies/damage enemies?

3. Soul Swell. Possibly an AoE damage spell. Alternatively, Muerta will receive bonus damage based on the amount of damage dealt to enemies.

4. True Love. It might not be the ulti, but it sounds frightening: what's scarier than the love of death's revenant? This could be a super powerful strike or a high-damage mode. It might also change Muerta's form, as seen in the trailer.

So far, nothing more is known.

Who do you think Muerta will be? A support or a core? Maybe even a new mid-laner? We haven't seen a pure pos1 carry for a long time, though; moreover, an INT-based one. Unfortunately, we will only be able to find out in 2023.

For more Dota 2 Coverage make sure to follow BLIX.GG