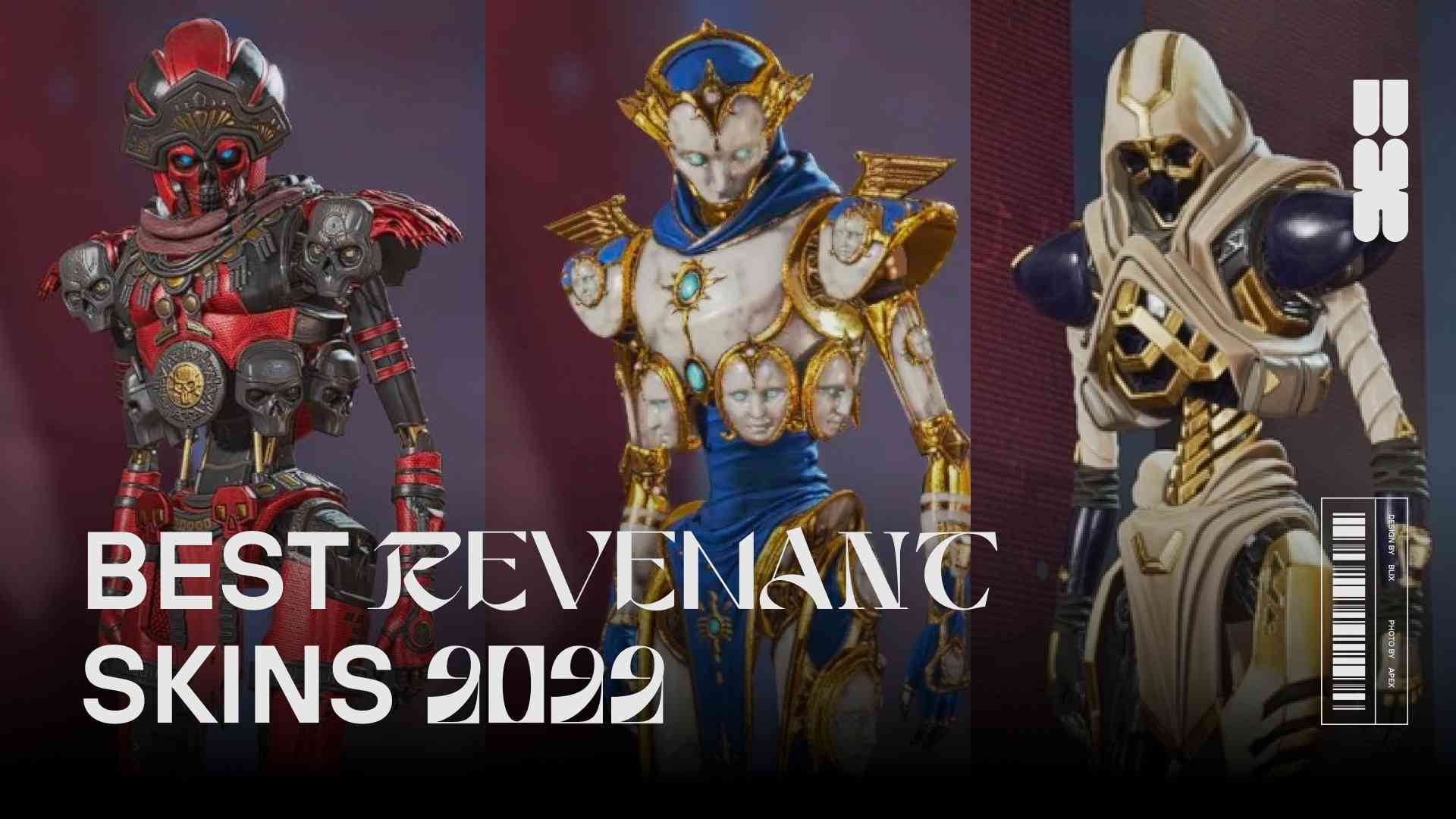 Revenant is a villain in Apex Legends with a more aggressive playstyle than many other characters. Players prefer him because of his abilities, the highest of which gives extra life and revives the player in a given location. It is called the “Totem of Death”, by the way.

This article describes the most popular and fascinating skins for Revenant. But keep in mind the non-obvious beauty that many people usually pass by. 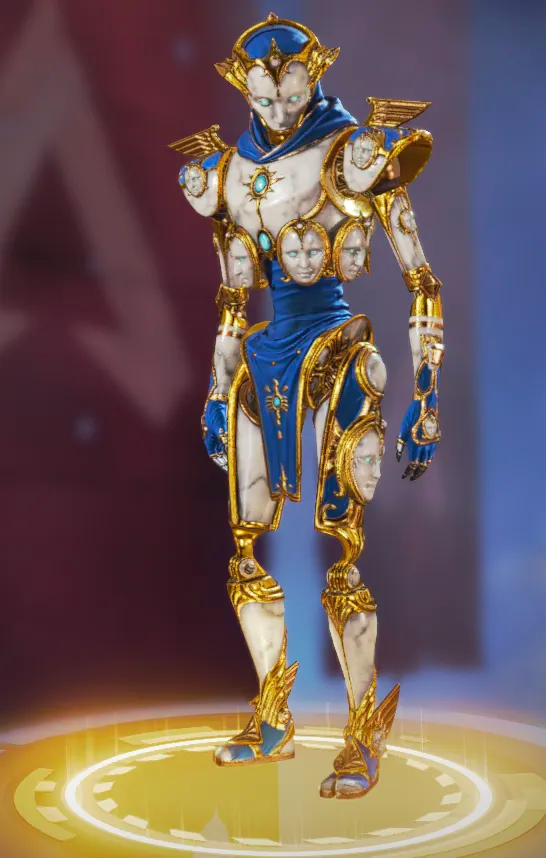 A Gaze Eternal skin is made of marble, blue cloth, and gold details. He has masks with luminous eyes on his legs and arms and wears a golden crown on his head. In addition, his broad shoulders are adorned with golden wings.

A Gaze Eternal was first introduced to Apex players in Season 8 during the Chaos Theory Event. This legendary skin could be obtained for 2,400 Crafting Metals or 1,800 Apex Coins. Considering that the skin was closed at the end of the event, do not give up hope of getting it, as Respawn periodically brings back unique skins from past events. 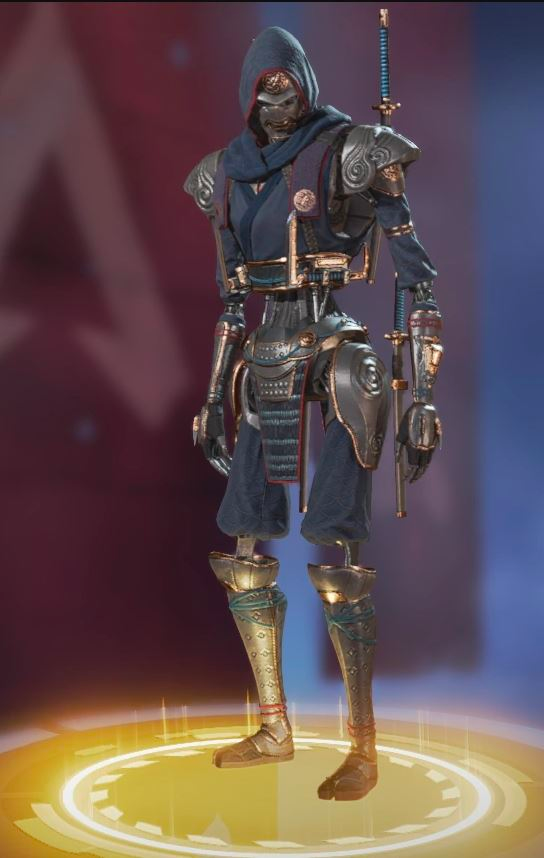 A ninja-style Synthetic Shinobi wears tabi boots and hides his face under a hood. A dark blue and burgundy fabric suit, combined with bronze elements and katanas on the back seems to be a perfect match. Like a real ninja, this skin can climb walls higher and move faster while crouching.

During the Japanese-style Genesis Event in Season 9, players first met this legendary skin, and they had the opportunity to get it into their collection during the Anniversary Event in February 2022 for 1800 Apex Coins or 2400 Crafting Metals. 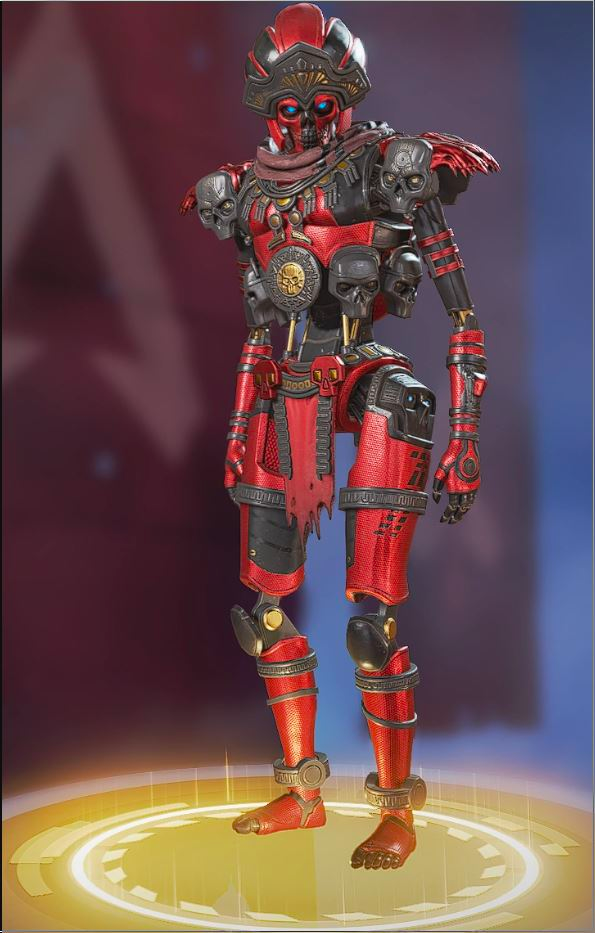 Blood Ritual is a terrifying skin from the Anniversary Collection with a unique red metal design and numerous fearsome skulls. As an alternative look to another Revenant skin called Relic of Death, this one looks like it came out from a sea of blood.

Blood Ritual was first released in Season 8 in 2021 and was available for 1200 Crafting Materials or 1800 Apex Coins. 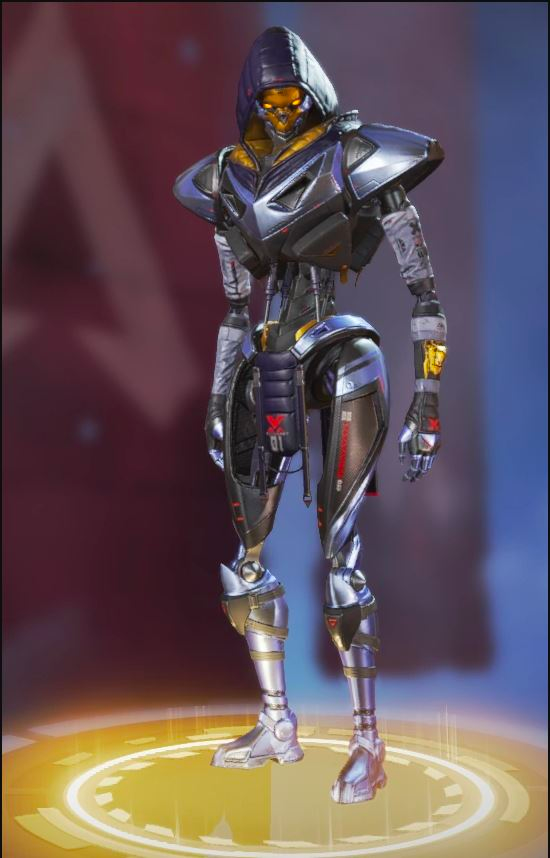 The futuristic design of this Revenant skin is made of shiny purple metal with glowing details. By the way, this sporty design perfectly matches his figure and bright yellow eyes.

The Death Proof was first spotted during the 2020Season 6Aftermarket Collection event and a second time during the Dark Depth event in 2022. An interesting fact: while watching the streams on Twitch, players had the opportunity to unlock a special fan-created spray called "I'm Beautiful," which is perfect for showing off all the benefits of Dark Depth in Battle Royale. 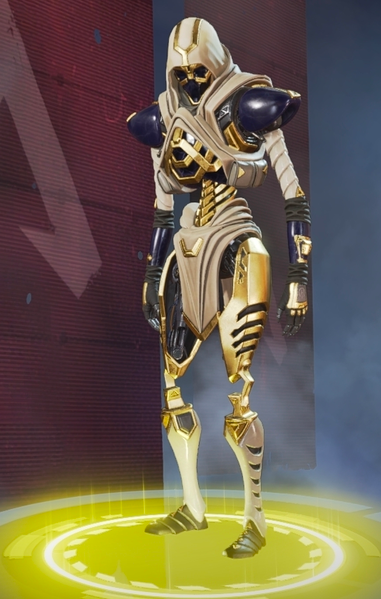 This elegant Revenant skin comes in white and gold colors for a truly royal look. His blue shoulder inserts, golden armor, and white cloth hooded mask give the impression of divine creation.

Sacred Divinity appeared in 2021 during the Fight Night Collection event in Season 7, and since then, fans have never been lucky enough to get it again. At the time, the legendary skin could be purchased for 2400 Crafting Metals or 1800 Apex Coins. 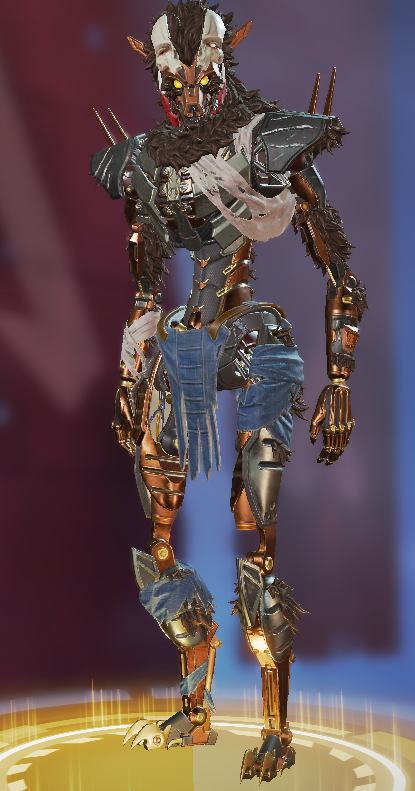 Necro Nightmare is an atypical skin for Revenant, representing a living nightmare. This skin is a predatory image, reminiscent of a werewolf in transformation or a bear rising from the dead. Tufts of fur protruding from the metal, torn fabric on the body, and claws on the legs make the appearance of the skin almost invincible.

Necro Nightmare is a recent skin for Revenant, first appearing in 2021 as part of the Monsters Within event. There was an opportunity to get the skin for 2400 Crafting Metals or in packs. 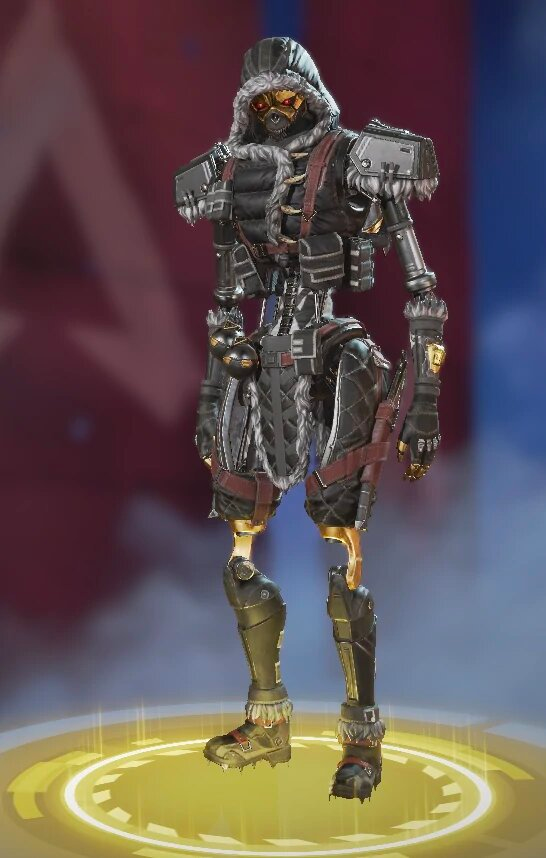 No Chill is pretty simple skin made in dark colors. The appearance consists of a short cloak made of leather and fur inserts, a golden mask, and limbs. It seems that the idea for this skin was taken from another but more luxurious and massive Black Heart skin by Caustic.

The current skin for Revenant first appeared in Season 12 and was available right after the Anniversary Collection Event in 2022. That is likely a new skin that players can craft using 2.400 Crafting Metals, or alternatively purchase it for just 1800 Apex Coins.

Shadow On The Sun 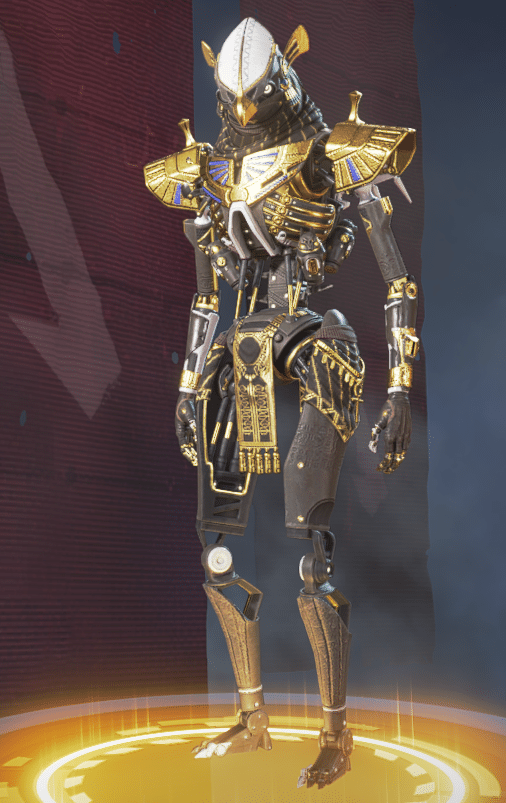 This is the first skin offered in a series of three more Revenant skins that look like a bird. The difference is only in color solutions and methods of obtaining. Shadow on the Sun has the cleanest and most aesthetic design, including black and gold colors, and it is required to create another cool skin for Revenant called Ra Fury.

There are no Events or Battle Passes that have Shadow on the Sun skin inside. This legendary skin can be crafted using 1200 Crafting Metals, or players can use the alternative purchase option for 1800 Apex Coins in the Apex Store. 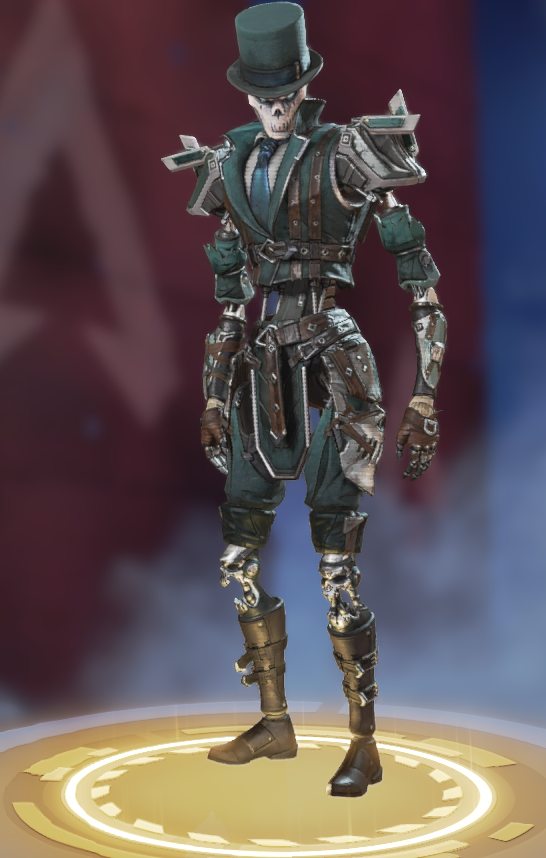 Another rather memorable skin for Revenant is the Mail Order Monster. It looks very solid, just look at that hat and tie. This skin was released on November 1, 2022, in Season 15. He has a Legendary rarity, and you can buy him inside The Eclipse Battle Pass for only 950 Apex Coins. The hero can be unlocked by reaching level 50 of the current BP.

The last one to discuss is False Idol, which, according to most players, is the best skin for Revenant. The majesty and massiveness of this skin, combined with colors and design, put it a head above the other Revenant skins. You can also check Bleach Boned or Predator Instinct skins if your goal is to make your enemies afraid to fight with this Revenant look.

False Idol skin for Revenant is not a part of any Event or SeasonalBattle Pass. Players can craft it for as little as 1200 Crafting Metals, with a second option of purchasing it for 1800 Apex Coins in the Store.